One of the rubbish things about losing ground on your fitness is feeling unreasonably tired for an unreasonably long time after a race. No way I’m agreeing it’s old age 😂

Track on Thursday night (4 days after the DUNE HM, big hills, blizzards etc) was an exercise in grim determination, a time pyramid 1 min, 2 min, 3 min, 4 min, 5 min, 4 min, 3 min, 2 min, 1 min for the efforts with very stingy (the longest was 1 and a half minutes I think, but seemed cruelly short!) Jog recoveries. Could be depressing, but for now I’m going with it being a point in time, on a trajectory that’s heading up!

After the session the coach mentioned Annan River Race (ADAC) this Sunday…an annual cross country race in a town about 18 miles down the road towards Gretna. It was also the Club Dinner Dance on Saturday, but so long as too much drink wasn’t drunk a measly 6k shouldn’t be too much trouble, right?

Checking it out, it was also the Dumfries & Galloway XC Championships so there would likely be a decent race. There was entry on the day, but it had to be before 11am and the Senior/Masters Race looked like it would be last (in time honoured fashion) which is fine when it’s ok underfoot but if the ground is soggy it can be pretty challenging and disgusting by the time all the other races have churned it to slurry. The national cross country last year was a great example of that, the Senior men were almost wading in Glastonbury-like swamps, did I ever send you the pictures of Sean and Andy from that race?! 😂😂😂 The weather in Annan was actually alright for February in Scotland! Damp with a bit of drizzle but not too cold (relatively speaking) and hardly any wind. Too chilly to stand around in running gear maybe, but fine if you’re moving about…until 1:30 when the race finally started. After circling a set of pitches (in order, said the race director, to open out the race…some of these old guys can’t think straight when they see a 17 yr old haring past and charge after them…have to get the young bucks and the old bucks spread out before they reach the river or someone will end up in it!) then up a grassy muddy hill and down again (cursing the impulse that made me wear the inov8 x-talons instead of the spikes!) then through a boggy field, up another hill on stone steps then down it on a slippy concrete path (thanked my lucky stars for the impulse about the shoes!) then most of the rest on the riverside. 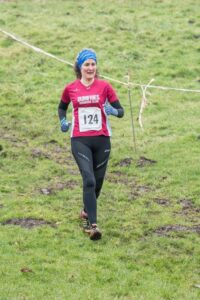 Somewhere about here a Marshall said I was 3rd female, so I got instantly and shockingly paranoid about whoever I could hear behind me. Weird, huh? You’re running along quite happy, doing your own thing, someone tells you that you’re in a position to be ‘placed’ and all of a sudden it turns into a RACE.

The slog up the riverside was quite an adventure…it’s a scary looking river, you might use the term ‘torrent’ without too much argument, and it’s walled so the (disturbingly narrow) muddy path seems to be poised an alarming height above the racing water…and the path was really gloopy! I’m not sure if it was intended to be reassuring that there were coastguard marshalls at regular intervals along the route, but it didn’t feel that way! In fact I was paying so much attention to the slippery path as I ran as fast as I dared, that I got the fright of the century when I almost ran into a guy in head to toe high viz (I’d swear a sou’wester was part of the gear!) standing quietly at the side of the path, before realising he was a coast guard there to fish me out if the worst came to the worst. Another gripe, the path wasn’t just thick slippy mud, it was angled, like the worst camber on the crummiest wee country road, angled down towards the raging torrent below! Have I mentioned how much I hate camber? It’s an evil plot against ‘mature’ runners who have joints that scream at repetitive off centre steps, and almost a good enough reason to avoid road races on country roads.

The next joke from the organisers was a suspension bridge; I felt the guy behind me get on when I was half way across but i had it bouncing so hard he told me later he had to walk and couldn’t manage to run at all 😂 It’s all part of the race! 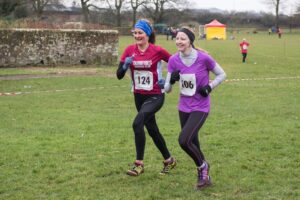 The paranoia of the placing had me waggling my ears back the way every time I passed a Marshall who offers any encouragement (sneaky way to try to judge how far back the next person is without turning to look, because, as you know, you NEVER LOOK BACK, it’s a sign of weakness and gives them hope) and there was definitely someone being cheered on not too far behind me, so I dug in and forced the whinging legs to keep going until the end. 6k isn’t too bad really, you can tank it without killing yourself completely! In the end the person behind was a guy, so I needn’t have worried (but you don’t KNOW that at the time!), and came in 3rd (female) by a reasonable distance, which got me a nice wee trophy for being 1st FV45 and a bronze D&G Championship medal too 😁 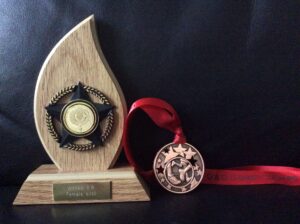 Being realistic, I don’t know about the rest of them but while I might not be on top form  speed wise, it still feels great to run harder than usual. And if anyone fast had been at the race I’d have had no chance to get 3rd place but do you know what? They didn’t go, and you can only race the people who turn up at the start line 😊