When Duncan Macfarlane was 15, the school science teacher brought in a cine projector and showed a film of Jack Lovelock racing clear of the pack to win the 1500m in the 1936 Olympics. Young Duncan was transfixed. A passion was born.

He joined Athletics clubs at school and university and later Victoria Park AAC, training with them twice a week and racing most weekends. Athletics was huge, with clubs in every wee town putting on race meets. Young athletes would travel the country to compete, mostly by public transport. The prizes were often put up by local businesses. This sometimes led to interesting challenges like trying to get the first prize chest of drawers home on the bus!

He was good enough to win several trophies and prizes, individually in Open Mile and Two Mile races, and as part of teams which included the great Scottish athlete Andy Forbes. Duncan loved best to run in a team, whether the 4×1 mile relays on the track, the longer road relays (e.g Edinburgh to Glasgow, Dundee Kingsway and London to Brighton) or cross country where every single place you gained might be the point that got your team onto the podium.

A favourite was the Edinburgh to Glasgow Relay Race which he ran 3 times for Victoria Park. This included running 3rd leg when the VP team set a new course record in 1950. But his greatest claim to fame was being in the Victoria Park AAC team who famously won the 1952 ENGLISH Club Cross Country championships. 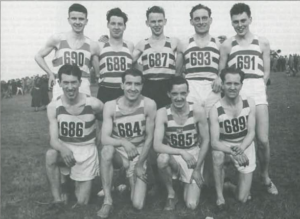 He perhaps missed his best years of Cross Country when national competitions were suspended during the war. However starting in the 1946/47 season, he competed in no less than 18 successive annual Scottish Cross Country Union Championships. One memorable year was an especially hard winter. On race day the snow lay 18 inches deep with the frozen ground like iron underneath. Fortunately the senior race was last so earlier racers had beaten a narrow path through the snow. Even so, the going was so brutal that Duncan lost a toenail…his feet were so cold that he only noticed on taking off his running shoes afterwards and seeing the blood! They were made of sterner stuff in those days, nowadays races are cancelled for a couple of inches of snow.

Duncan reluctantly gave up competitive running in his 40s, which at the time was considered old for a runner. He wished he had been able to run longer.

He loved that his adult daughters and grand-daughter began running and relished every muddy detail of each race report. In later years, when walking became increasingly painful and difficult, he often said (with a smile) that in dreams he could still run fast enough to feel the wind in his face. 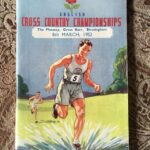 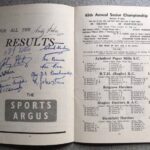 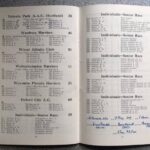 With thanks to the daughter of Duncan Macfarlane, Anne for the bio. Further reading on Duncan is available at Scottish Distance Running History. Anne also writes a blog for Acorn Trails. More can be read here