Plan B at EMF

When we started out with the idea of doing a 10k and HM on consecutive weekends, it was going to be Kirkcudbright HM. Then all our plans were thrown into disarray by Number One Son, who – can you believe this – set his wedding date without consulting our race calendar! Scandalous. 😲

Plan B was Edinburgh HM, which gave us a whole day to recover from the hangovers, over-eating of cake and similar rubbish, and plain old sleep deprivation.

Lining up at the start (shivering in vest and shorts…when we packed our race kit, before leaving for the wedding, the forecast in Edinburgh for Sunday morning was blistering sunshine!) I thought, at least the general dehydration and low grade tummy ache from wine and too much sugar could be viewed as a clever approximation of having spent a fortnight carousing in the sun. It certainly didn’t look like there was much danger of overheating during this race…my finger tips were white with cold and it was actually raining! My Auntie who lives in Edinburgh assures me this wasn’t in fact rain, but some ghastly rain/fog hybrid they have there called ‘haar’. There were definitely cold wet drops landing on my bare shoulders! 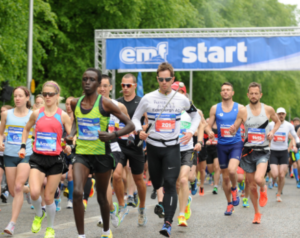 Starting a race at 8am on a Sunday morning in a city is either thoughtless or deliberately cruel. No public transport, no parking spaces, hardly any toilet facilities. And to add to the awkwardness, it’s a point to point so the finish is 13.1 miles away and NOT near buses or trains! We were able to persuade Number One Son and Wife to do some post-nuptial family visits so secured a lift to nearish the start, but I’ve no idea how other non-natives managed. Also, it was c-c-cold. The race began on schedule, heading from Potterow up and over the Mound then looping down hill…at some points we were on the Royal Mile, Princes St Gardens, Holyrood Park, but I don’t think I could retrace the route, I was too busy concentrating on running without tripping over the many over-optimistic people who had clearly badly misjudged their potential finish times. Or maybe they just wanted to line up at the start with their much faster friends! By about 5 miles we’d moved out of the city to the coast, where a stiff breeze was coming to meet us. Did I mention how cold it was? 😂

A half marathon is quite a long way really, and all sorts of things go through your head as you run. Being somewhat out of sorts owing to the ridiculously early and awkwardly placed start, cold wind, and perhaps a wee remnants of hangover, I was being ‘outraged’…call themselves a European capital city, I groused, bad-temperedly, why no KM markers? I mean, even in this country, anyone my age or younger, which has got to be most of the runners, did the decimal system at school, so who are these mile markers even for?

I was secretly impressed when I passed portaloos along the route, a facility I would definitely have availed myself of, had I been in less of a hurry! The water stations were also frequent and well staffed. About 8 miles in we turned back into buildings, which, mercifully, reduced the wind a bit. It was there I noticed that I could see my breath. 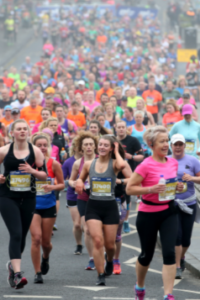 A busy race at Edinburgh Half Marathon

In general it’s a pretty flat route, most of the hills seem to be down the way, although that must be an illusion or the race wouldn’t count, isn’t there a limit to the net amount of elevation you can lose over the whole race before it doesn’t count? I’m sure I read that somewhere!

Anyway, the last maybe 4 and a bit miles is straight out a long road with the fast people coming straight back in on the other side…by this time it really is a slog, and a bit of contour or a wee corner or two would be a welcome distraction. Out to the turning point and slog back in again, waving cheerily at the slower people still on their way out 😂 At one point a wee girl shouted my name (printed on the race number, though not so prominent and readable as on the bibs in Paris) and ran 100yds alongside me 😊

They don’t mark the last 800m, 400m, 200m, (🙄) but if you kept your eyes open you might have seen the 13M sign, and the last bit was on slippy metal ‘boardwalk’. The finish area was laid out so that you were given a muesli bar, a bottle of water, an electrolyte drink tablet, a medal and a tshirt in a box, then ushered out the other side into the crowds of runners and well wishers. Baggage claim was efficient. Pinkie Park, the finish point, would be a fantastic venue to finish a race, if only it was anywhere near public transport routes. Having researched it beforehand, we knew if we moved quickly we could make the 20-25 mins to the train station to catch the one train an hour (Sunday service). The bus, just as far away, would take an hour and a half to get into town! We made it, with a desperate sprint the last 100m which gave our legs a turn at feeling outraged, and 12 mins (sitting in the luggage rack!) on a packed train got us back to Edinburgh.

Final time 1:40:49. Not a pb, but pb for this year and the best I’ve run for a while. With Tom Scott 10M and Dick Wedlock 10k that’s all 3 distances at Gold Standard for my age, so quite chuffed really 😁