One of the amusing things we (Planman and me) realised early in our running ‘career’ is that when normal (not runners) people ask you about your race, they really don’t want any more than ‘it was good, thanks’. Eyes glaze over and interested smiles become fixed and (if you persist) painful when you actually tell them. Nothing like the gritted teeth of a desperate, fixed smile to cure you of sharing the detail, though I will confess, it is a good sneaky way to inflict minor revenge on annoying people who really don’t want to know but make the mistake of asking! 😈😆

For years I used to hoard up race tales for my ancient no-longer-able-to-run runner father, who relished the detailed descriptions, the more evocative the better. Since he passed away I’ve acquired the new habit of writing the stories for the (flatteringly interested) ‘Running Niece’. Somehow over the months they’ve also become a personal history…I can imagine digging them out to smile and sigh over when I’m too old and creaky to run anymore, so I can revisit how it felt 😊🏃🏾‍♀️🌤🏅⏱

Trouble is I can’t really get a story to work unless I’m telling it TO someone, and for our adventures in Strathspey last weekend the Niece was one of the running compadres. Since she was there, I can’t convince myself I’m telling her all about it…

You, sir,  generally do an excellent and very courteous impression of being genuinely interested in the gory details of our races, so I thought I’d try doing the tale for you 😊 hope that’s ok.

Race the Train is a 7k-ish run organised for fundraising by Disability Snowsports UK (DSUK), in partnership with the Strathspey Steam Train from Aviemore. You go up the line into the Cairngorm National Park on the train, you run back. 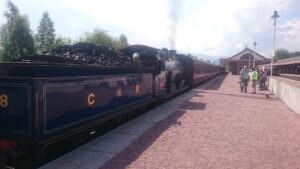 I’d probably have said you’d have to be local or stay overnight beforehand, but the Niece and her other half successfully drove up from Glasgow the morning of the race. The day was gorgeous, ☀☀☀ sun splitting the sky. Forecast had threatened lightning pretty much all day but there didn’t seem to be a cloud in sight. Registration was at a cafe in a local industrial estate (handy if you like a bacon roll before you run!) but the ‘race experience’ of this one starts with everyone making their way (by shuttle minibus, or there was plenty time if you wanted to walk or jog) to Aviemore Station. Over the footbridge and up the end of the platform is an information office…you go into it and out the back and there it is, a wee hidden old fashioned platform, with guards wearing peaked caps 👨🏼‍✈️👩🏻‍✈️😀. It felt a bit like a Harry Potter scene, going through the portal to find yourself in a different century!  Then we all piled onto the fabulous, old fashioned but immaculate train, waited for the steam engine to be attached, and chugged up the line. 🚂 You could see paths winding through the woods and over the moors alongside the train and imagine yourself bounding effortlessly down them. Our train neighbours, from Stonehaven, included a retired Met Office guy who pointed out the solid, metallic looking clouds that seemed to be huddling in the Lairig Ghru in the mountains off to our right, saying they were headed in our direction and there may well be thunder and lightning through the race…watch for them becoming anvil shaped, he said.

From the train station in Boat of Garten (which is a bit like the village in Hot Fuzz!), we all strolled up to the community centre at the top of the village where there was ample space for warm up, toilets, changing space and a baggage van. The race doesn’t start until the train leaves the next station up the line on its way back, and the idea is that you try to make it back to Aviemore before it – hence the title. There was more hanging about waiting for the signal to start, and afterwards we wondered if they couldn’t have started us a tiny bit earlier…maybe when the train reached the other station instead of as it left, so that a few more than 3 of the 248 runners had at least a chance of beating it. It’s a lovely day out, and a nice run, but for most of us the race (if it was against the train) was over long before the finish line!

We started at one end of a football pitch with a small gate onto a narrow path at the other end…the smart people sprinted the length of the field, the rest had to stand and wait their turn to get through the gate. Maybe once around the pitch before the gate would have spread the field out a bit so there was less of a bottleneck?

The path at first was quite stony and uneven, winding through deciduous woods and joining a Jeep road with deep ruts. For most of the rest of the run though, it was actually very smooth, dusty pale asphalted cycle path. Undulating today meant overall fairly flat but with a bit of very picturesque, winding and lilting variation. Pleasant woods, white trunked birches and big old Scots pines, and bits of moor were glorious in the sunshine, gorse blossom making the hot air heavy and sleepy.

All too soon the sound of the train whistle behind us jolted me into a gear change, just for a few minutes until it went huffing past and the race was lost. Strange, the psychological effect of that! The last km seemed longer, the air heavier. The sky was suddenly grey…what shape is an anvil? I wondered. Did he mean an anvil looking at it from the side or from above…the clouds definitely looked solider, kind of outlined in bright light in a slightly ominous way…then we were joining footpaths on what I’m told is part of the local Parkrun (Niece and partner did the Parkrun that morning before the race, as well as the 10k after!) and the final stretch wound quickly through the woods, under a bridge on damp cobbles with a stream to fall in if you slipped, then up and over a sharp wee hill to the end. Cups of water and bits of fruit could be queued for at the finish but no time to hang around…in a fit of enthusiasm weeks beforehand (before even thinking of the Edinburgh HM the previous weekend!) we’d entered the Grantown 10k, starting 12 miles away but less than an hour and a half after the START of the Race the Train. Most of that time already gone and registration closing in 20mins. Curses filled the air with grumbles of ‘who’s brilliant idea was this anyway!?’ (Alex!) 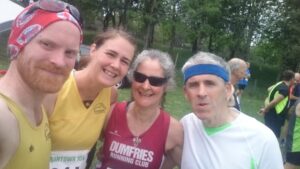 Who’s idea was this?

The grey skies sunk closer and closer as we made haste to Grantown. We’d taken the precaution (the benefits of having Planman as a spouse!) of scoping the journey including potential parking the night before so the turnaround was smooth and fairly low stress. Quick change of soggy sweat-soaked tops, guess the shorts will have to do. Glad we’d checked the location of the primary school for the start though; just imagine pelting around the town searching back streets for the school with a clock ticking down and a brain half frazzled by the previous race! The anxiety reduced once we had our race numbers and actually, they waited a bit past the advertised registration closing time for people who were coming from Race the Train so we needn’t have rushed. The start was out in the playing fields behind the school, straight after the kids race, and as we lined up big fat raindrops started sploshing down. With the heavy air, it was a relief and we just hoped we’d get going before the real deluge…it’s ok getting soaked WHILE you run, but harder to set off in the rain! In the end those few drops were all the rain we got, though we could hear thunder in the distance.

It is a lovely route through Anagach woods, following bits of scenic road and pretty twisty paths. Marked in kms. There were loads of cheerful marshals, making music (one guy was playing a chanter to the runners as we passed 😃), offering sweets, water and words of encouragement. It wasn’t too hilly, though the tired legs (Edinburgh 6 days ago and the morning race too) meant there was no way it would be fast. In my mind’s eye this was the second half of the HM in Malaga, hence the heat and the fatigue! When the 8km sign appeared I dug into my boots for a gear change and did manage to go a bit faster. The last half mile brings you along a level stretch of road, then turns sharply downhill into the playing fields, letting you build up a bit of steam for the last 200m to the finish line.

More friendly marshals passed out medals and cups of water and there were coffees, teas, rolls and cakes on offer in the school hall in aid of school funds. They were also super-efficient with the results, writing them up on a whiteboard in the race tent almost as fast as they came over the line, with one of the race helpers sitting cross-legged with a laptop inputting them electronically so they were able to produce the age-category winners in time for the prize-giving. 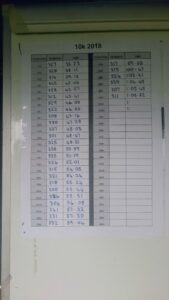 When we got back to Aviemore, tired and craving ice-cream, we discovered where the thunder had been…the streets were awash with recent rainfall; apparently there was quite the monsoon!

All in all an excellent day’s running. I would definitely plan to do it again. If we can arrange not to run a Half Marathon the weekend before, then next year I’d even aspire to doing the ‘treble’ of Parkrun, Race the Train and Grantown 10k!