Jim, King of the Park


So i’ve finally got to the bottom of this running around in dark in Kings Park malarkey!

It all became clear one morning, I’d barely finished my full body stretch-shake my flappy ears routine, when we were off; pitch black, half asleep in the Bash mobile.

I’ll just finish off that sleep thinks I.. Oh no, we were stopped and parked up again in minutes! Just what was going on here? Mum and dad start unloading things out the Bash and dad launches my tennis ball. Yasss!!

I’m not sure how long I was playing with it for. Other humans were gathering so I got a few of them to throw it for me too. I’m lightening fast bringing it back and I never get bored of it. I out played them all! 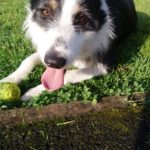 When I came out of my tennis ball trance though, there was quite a crowd gathering. Had they all come to throw my ball for me?! Mum and dad seemed to be speaking to them…maybe telling them the best ways to initiate tennis ball launch sequence!

Dad stood up on a bench and spoke to the pack. Mum got me on the lead and we walked up the hill where we met my human pals Brian and Rodger. Next thing I know the humans have formed a pack and are running towards us and mum and Brian are ringing their cowbells and shouting well dones with all their might. Now I dont mean to show off but my hearing is pretty advanced so this constant ring dinging in my ears was far from enjoyable. Ive marshalled before though so i know how necessary the cowbell is to proceedings. I remained cool as.

It was pretty exciting watching the race and I saw lots of my human pals. Andrew invited me along for a lap, I was well up for it. I know the route better than most. I leapt towards him and started to give chase but.. Booooiiiiiing!!! I was on the lead. Totally forgot, whoops! Maybe next time. 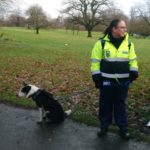 After going passed me a few times, the runners crossed the finish line. They hugged and ate their bananas and collected their goodies. Before we knew it we were packing everything back up again, trying to beat the rain! We nearly did too. Me and mum made sure Bashy didn’t get lonely while dad and the gang finished off. They got a little damp!

So from my intelligence gathering/midnight chats with Cleody. It would seem that this was not a one off event. Cleod’s always hacking into dads computer, tapping away at his keyboard when he’s not looking. She says its some sort of race series, Sx5, Six 5k races in the southside parks of Glasgow. I’m not sure on numbers, stats is for cats. Cleody knows her stuff. 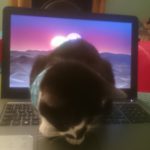 Recently we’ve been doing a lot of squelching about in the mud in my favourite, Linn Park though (Kings Park is good though)! Yes!! So it looks like she could be right. Watch this space!

PS More of my tails are here….