PAWS IN A PUDDLE

Now, there has been some strange behaviour going on round my way..

It started last (eh, do days have names?!..) Some time ago anyway, we dropped Kei off with her cub pack and then went to a new park I hadn’t seen before. In fact at this point I still hadn’t seen it, it was pitch black! Smelled pretty good though! All the usual stuff and a couple of new dog brands for me to investigate. Fine by me, I’ll follow my nose; those two had some sort of fancy head gear on which seemed to aid their passage through the park.

And off we went, running aimlessly in a pitch dark park?! Who knows! was fun anyway, until mum fell and got all sorts of muddy and sore. I sorted her out – licking her face, while she sat in a puddle of wet leaves feeling sorry for herself. Luckily I had just stopped for refreshments in a similarly muddy puddle. When I licked her better the reminents of that, which had stuck in me beard went all over her.. You are welcome!!

Dad eventually managed to get mum to stand up and get out of the puddle, wiped her face and gave her a cuddle (aww). They then walked a few steps before setting off again! On the way round I met a few other hardened canines, not many brave enough to face the dark cold winter nights. I just nodded my approval as I passed. I’m Jim on a mish when I’m running, no time for funny business.. Unless there’s a black lab in the mix – they are very hard to resist!

The start of the weekend was a similar story.. Same park but this time we could see! 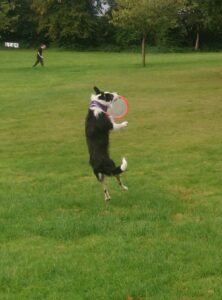 to run in the same place all the time, something fishy going on. I must talk to Cleody cat about it. What she doesn’t know about fish ain’t worth knowing!

Meanwhile I just enjoyed the joy of running as always. There is something comforting about running a familiar route. You can switch off a bit, enjoy your thoughts, and reminisce on Frisbees, tennis balls gone by and generally enjoy the wintery splendour of another beautiful Glasgow Park. City life ain’t too bad at all!!

Saying that though; the next day was something else!! We were transported to another land by the Bash mobile. I mean wow!! This place was white, cold and frosty under paw and the water stations were frozen all over!! The ice cold fog froze my beard and there was steam coming out of my nose! Today I would be Jim the Arctic explorer dog, yaaaaaas!!!! 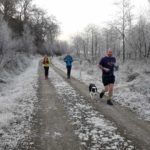 Croy, that’s what they called it. The Àntonine half was the name of the game.

We met up with quite a large pack in the carpark this time, I’d have my work cut out keeping these guys together! Dad started at the back so I stayed with him, he knows best. But there was soon talks of Phil taking everyone on one of his diversions. We made our way to the front just incase! The path quickly went from concrete to frozen bogfest! I got the odd whiff of sweet Jim.. Have I been here before?!.. Remarked at every opportunity to be on the safe side.
We were soon travelling uphill, love a hill, that soon warms us up!

The pack were spreading out but there were smiles and looks of wonder all round. It really was quite spectacular.

We ran on, travelling from one perfect winter scene to another. On our first venture up Croy Hill, my friend Sam found the rope swing and could not resist having a shot!!

I shouted to him to chuck me an end so we could play tug of war (one of my new fave games) but he was too busy whooping with glee to hear me!

We regrouped a few times but it was too cold for the fast guys to hang about, dad was in shorts and t-shirt!! Phil knew where he was going though so he moved with the faster pack and me and dad hung about for mum and the gang. I could count on two paws the number of drinkable puddles I had come across, I mean, it was cold so I wasn’t too thirsty but while we were huddled up waiting for the gang I helped myself to a couple of icicles from dad’s beard.. Refreshing!!

Things got a little hairy on the boardwalk section, as I skidded along I noticed a large obsticle in our path.. Two fences, reinforced with tape blocking the path, which had become really quite broken. I felt like they were trying to tell us something. But nor me or my human companions could work it out so we pushed on. Well the two legged contingent climbed round. Dad had to pick me up.. So embarrassing! And if that wasn’t bad enough, I had to be transferred along his chain of pals around the fence till I was through. I had cleared the obsticle by the time mum and the others had arrived though. I stood up tall looking smug on the other side like I’d leapt over it all in one go. Haha! Nailed it!

My favourite section was Barhill wood. Its all uphill but soft and warm(er) underpaw. Beautiful tall trees draped in frozen spiders webs and covered in frosted lichen. The wind was picking the frost off the trees one bit at a time. It looked like little snow faries dancing in the breeze. I ate at least ten. Sorry boys!

It was peaceful and wonderful though and after climbing the last sharp Everest section it opened out to a winter wonderland. Incredible. I ran back to get mum, she gave me chicken. Life was good.

The route was great, some sections were along the pavements though which means lead time for me. Not my fave but I soon forget about that when I am released into the wilds once more, top speed ahead, giddy hop, giddy hop.. 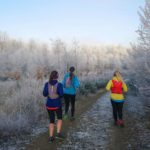 I love it when they say that, it gets passed up the pack as I dodge through their ankles like a canine torpedo. I am slick and fast, the humans however, fall all over the place as I glide passed smiling! Four legs are better than two I guess!

PAWS FOR THE VIEW

Our second venture up Croy hill took us up a much steeper route, mum started walking when she saw the sign but dad was on a mission. He would run all the way to the top like he always did.. Except that time in the actual race. That’s behind him now though, we ate that hill for icey brunch!! Yes!!

I smelt my sweet familiar scent on Croy Hill, I sure do get about! Me and mum had been spectating the race there, playing fetch to keep warm while we waited. It was all coming back to me. 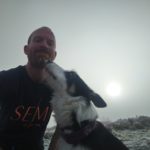 I ran back to mum and jumped about wildly asking if she remembered where I had left my tennis ball? This was the perfect opportunity for a rematch. She didn’t though, could be anywhere really, I’m just too good at hiding them! Ah well, we best keep moving, we were nearly back at the Bash mobile.

PAWS FOR A REST

The last sections were downhill, then flat over more lovely frozen grass and bogfest.

Just when you think you’re on the home stretch though, back on the concrete, two more steep hills are there to greet you, nae bother for a super dog like me though.

We made it back to the carpark to find the fast pack trying to warm up. You do cool down quickly when you stop. I was delighted to get dry and onto my cosy sleeping bag in the Bashy boot!

When mum (eventually) turned up, she gave me more chicken! Yes! I’m not sure how long she took but her hair had started going grey at the top! Luckily the aging process seemed to reverse when we got warm though!

To add a totally tropical taste to proceedings, Phil produced some sweet juicy pineapple.. Not to my tastes but the humans were delighted! He had bought it from a market in Africa earlier that week. (Actual Africa where the wild dogs live! Wow!) Some guys will really go the extra 100000 miles to make sure his friends are looked after!
Thanks Phil (next time mines a sausage though!)

And well done the rest of the pack, you were lovely company on a tough but wonderful run. 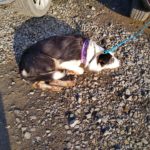