Lancashire In A Day


Pendle Way In A Day

I woke up at Dan’s crib this morning, having had a wee bunk down in Black Betty’s bed. A very comfortable slumber was had. Hope Betty doesn’t mind me stinking it out and leaving half my coat behind in it! Road trip time for some more Lancashire…Whatever the heck that is!

So everyone is scrambling around, looking for running gear.. Woohoo!! We hot paw it to the Bash mobile (likely late!) and mum drives us (me, Robert and dad) to wherever we are going. I caught the final part of my snooze in the Bash kennel so missed the details of the mission.

On The Road Again

We parked up, I woke up and had an epic strettttttttch. Then we headed to the visitor centre in Pendle where many other Lycra clad folk had gathered. Dad and Robert disappeared and me and mum got chatting to some runners and spectators, mostly about how cute I was. My eyebrows were going down well! Amongst all the gushing and head scratching we also told our new pals that we were planning to do parkrun.. Wooooohooooo!!! Those guys were gutted that they hadn’t thought of parkrun but said they’d find one close by and volunteer. Turns out their pals were doing the same mental race as dad and Robert.. 43 miles??!! Dad? What the heck?! This could apparently take all day. Now, I love running but on this occasion I think I’ll stay with mum, she is much more sensible!

Dad and Robert returned having found emergency coffee supplies and we regrouped and talked tactics. General gist being, run, more run, followed by hills, wind and me and mum at check point four. Go team!!.. And they were off!! Good luck you pair of maniacs!!! 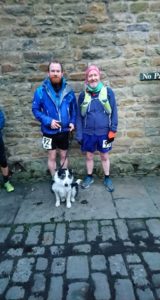 Me and mum headed for Bashy. Dad is usually head of Bash navigation so it was anyone’s guess if we’d ever find parkrun, but by heck she did it! On foreign roads too, go mum! (and Google!). We parked up and who should appear right beside us but our pals from the start line! “Hi Jim”. They had chosen the same parkrun as us and had offered to volunteer.

We found the start and listened closely to the first time park runner’s brief. We were supposed to be meeting uncle Jamie and my cousins here but we didn’t spot them so I thought we’d probably see them at the end, or when they lapped us!

After the brief we headed across a boggy field towards a forest and the start line. As per the brief, me and mum made our way to the back of the pack. We spotted cousin Callum so said hello on our way past. When we were just about at the back we heard what could only be described as an angry chicken gobbling! We couldn’t remember seeing any irate poultry at the beginners brief but they may have made a late entrance..perhaps why they were so angry. As we got closer though it became clear that the suspect chicken was actually some sort of rabid canine, chomping at the bit to get going!

Rabid may be a bit harsh actually, maybe just competitive. If he had made it to the brief he’d know it was not a race though. We decided to stay forward a bit from chicken boy, as my presence was not helping his gobbling issues. Now that was a bum I didn’t mind not sniffing! We settled into to our starting position and before we knew it we were off. We were keen to get some distance between ourselves and the young clucker. The run starting had just made him louder. He was right behind us, and I’m not proud of this but someone had to say it and not many others about spoke canine cluck. So it was down to me. I turned round and grumbled..

Wasn’t like me, I hardly make a peep. But this was necessary. We ran on and didn’t hear him after that. Strange beast.

Now that we were clear of the chicken and human congestion we could settle in and enjoy the run. The route took us over a well trodden path through a lovely forest. I love being amongst the trees and as the runners spread out I was able to enjoy the full stretch of the lead and could heave mum round. There were some wee hills, more mounds than hills really, and what goes up must come down (cue mum and her handbrake!) 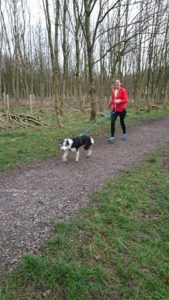 The fans were out in full force round the course. I couldn’t believe it, first we saw Uncle Jamie giving us a cheer, then my three pals from the start line were stationed at three different marshal spots, all shouting “well done Jim” as we trotted by! This course was a two-lapper so that was a lot of cheers! The other marshals were a real delight too, definitely fans of my work! I smiled all the way round as they cheered me on. My favourite section by far was a big gooey muddy section which we did twice. Off the path and into the sludge!! Yaaaas!!! Come on muuuuum!!!!
Cousin Callum passed us towards the end of our first lap, so impressed! Cousin Tamzin gave us a shout when we got to the home stretch too. Gosh I felt popular! 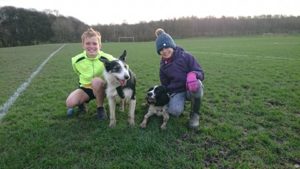 We were just coming round the final bend to the finishing funnel when the tail walker and her cat coming up behind us caught my eye. Cats and chickens, this is some parkrun!! I hit the brakes, this I had to see! I’ve always thought Cleody would enjoy parkrun but had never seen any other cats taking part. This was a game changer!! So we waited.. metres from the finish.. They finally got to us, the tail walker and, oh.. A dog! Whoops. Gave his bum a wee sniff to make sure, yup. Bumtest came back positive. He looked like he’d collided with a wall, his face was flat and I’m not sure he had a nose, was quite cute really though and he smelled good…

“Run on Jim!!”, whoops, sorry mum!!.. And, we made it!! Headed to get free coffee for mum and a lovely big bowl of water for me! One downside of this parkrun was the lack of water stations, the puddles were bone dry. This made up for it though. They even had a selection of biscuits for me. Now we are talking!!

We then went over to chat with the fam, on our way we saw a giant dog, standing on two paws. He was taller than mum?! Jings the wildlife here is confusing! Naturally we got a picture!. Then I found the fam gang and me and my dog cousin Charlie ran riot around the pitches chasing our balls. Yes!!.. 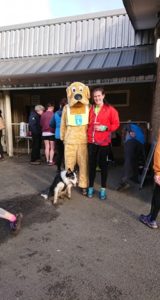 Once we were sufficiently exhausted and caked in mud, we said goodbye to the fam gang and headed for the Bash mobile. Onwards to the house of the grandparents.. They love mud right?! Mum had a cuppa with those guys and I baked myself into a coma beside their radiator. Yes! No idea how long we were there but it didn’t seem long before we were heading back to the Bash mobile. We sure were getting around today! Mum was back navigating and driving.. Eeesh!! Should be fine.. 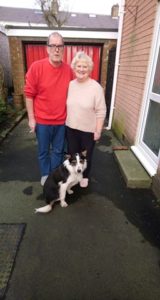 …..Or were we? We landed in the middle of nowhere and made for the village hall, curious! Turns out we were not lost; we were at check point four, where we would be marshaling and eventually meeting dad and Robert!!

I must say my marshaling skills impressed everyone! I got lots of compliments and gave all the runners coming through the opportunity to give me motivational pats and ear rubs. Meanwhile mum manned the bar and served snacks and drinks. What a team! 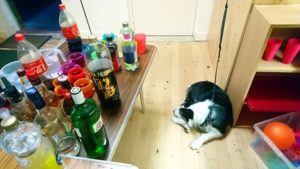 Our pals turned up to cheer the guys on too, Garrrrry and Ryan came in for a chat and Jamie, Ann and Tamzin arrived too. Dad had quite a gathering when he came in. I was so excited to see him, giddy-hopped up all over him and gave his face a good licking. He was looking rather windswept! Mum had poured him a drink from the bar. He gave her a big hug then took his drink to do a quick mingle of his people. When he looked ready to leave I gave him the face of neglect and disappointment. It didn’t work. How could he possibly resist these brows??!! I guess he’s on one of his crazy ultra missions, go daaaad!!!! And away back into the wind he went!

It was a long time before Uncle Robert arrived, the cheer squad had to get on their way. Me and mum still had lots of runners to feed and water. I was doing well on the hot-dog front; managing to perfect my starving dog look, they just kept coming after that!.. No dogs are harmed in the making of hot-dogs right?! I’d hate to think I was eating my bros. Man they taste good though! 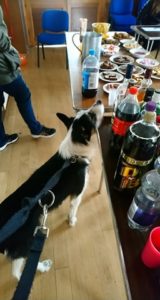 About 7 hours after we started (at least 49 dog hours), from the pitch black cover of darkness, out of the howling wind and the horizontal rain.. Appeared Robert!! Woohoo!! 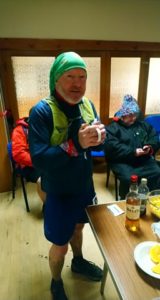 After a big smiley, jumpy greeting, I gave him the starving look but he wasn’t picking it up. He didn’t look great actually. Mum made him tea and suggested another five hours in those conditions might not be the best plan. He agreed. So we finished up and grabbed our stuff and hot pawed it back to the Bash and to the finish line (the visitor centre where it all started) to see dad finish with his new pal Scott. Got there just in time. 46 miles (of a 43 mile race). We were so happy to see him and so proud of him and what he had achieved. Robert too. What a pair. Quite amazing. 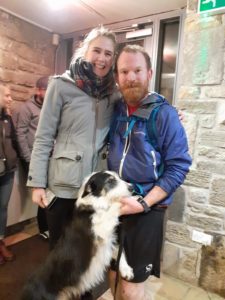 (Read more of Dad’s adventure here)
A truly great day was had by us all. I showed my appreciation by snoring all the way back to Glasgow. Bliss. Well done team and to everyone who had a part in making today pawesome.
Follow my tails here