Pendle Way In A Day Ultra


Pendle Way In A Day. It was some day. There was mud à plenty. Hills and inclines seemed more prevalent the descents and downhills. And wind. Wind, no matter what direction you faced it seemed it was a headwind. A constant companion for the 40-odd miles of the way.
Now I say “40-odd”, as this was an event billed as a 42 miler…. Jamie certainly used the artistic license that race directors are granted with event titles and course descriptions. After the last 3 miles trudging through deep mud in the dark, I vowed to have a word with him as my watch ticked past 45 miles! And no I didn’t get lost!

Growing up, Pendle Hill and its mystery always sat on the horizon of the Lancashire Town of my childhood. 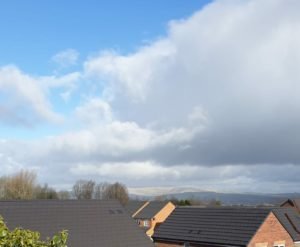 Pendle on the horizon of my childhood village

From a young age it had me hooked sitting tantalising close, but apparently further away than it looked.
My grandparents had a large painting on the wall in the parlour, depecting Pendle in a glorious summer scene. The rolling green fields of the foreground, culminating in the foreboding hulk of the hill.
My brother and I always took enjoyment from the picture, and in particular finding the witch. A tiny stick outline of the architypical witch on a broomstick hiding in the foothills of the main feature.
I vowed I would climb this “mountain” .

My chance came with the Boys’ Brigade, when as a Company we did a sponsored walk. The route that day was long and never summited the hill. It would be another two summers before we went back as a Company up onto the tops. I recall falling waist deep in a bog, and being pulled out by the supervising officer!
I love this hill. I’ve been up it many times from many of its angles. My dog has his ashes scattered on the summit. It’s a dear place to me.
All this pre-dates my life as a runner. I’ve never run up Pendle Hill. Today was not going to change that! The route meant that the hill would be a sting in the tail. About 37 miles into the route! Ouch.

The event came to my attention via the Trawden 7 race – another awesome Lancashire event, which I highly recommend. Race Director for PWIAD is also part of the club, Trawden AC, which organisés that event, so I figured it had some good pedigree!
Unfortunately I missed the inaugural pilot event in 2019, purely by bad planning. The pilot was just the 30 mile route, so entering the 42 mile this year, meant I was still first footing!

A brief section of canal would be the only respite we had from the mud, hills and wind. But who enjoys a canal run?
We left the heritage centre at a very sedate pace. The plan was to start slow and get slower. However I was already walking, and I hoped I wouldn’t get much slower.
I started off with Robert, but we both knew this wasn’t a long term plan. We both have a very different pace during an ultra. I ditched him about 4k in at a small hill. His failing is a slow power walk! 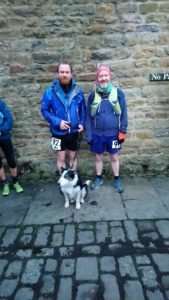 We had a group chat on the go, along with some potential on course visitors and my ever faithful Sidekick. Michelle would be marshalling at CP4, putting her spare time waiting for me to good effect. Prior to that she managed a parkrun, and a visit to my parents! Busy girl. 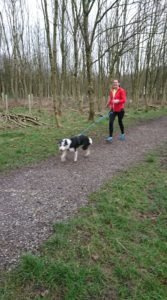 CP4 was already billed as “Blackledge’s Bar”, and images of the spirits on offer were displayed on social media to tease and tempt all.

Somewhere before CP1, I picked up Scott. We would run the rest of the race together. Pushing and cajoling each other through tough spots. I thought I’d travelled a long way for the event, but Scott had come down from Stonehaven!
Like me his childhood had been local to the race, before he moved north. Unsurprisingly, as we chatted we picked out some mutual acquaintances from Scotland. The Scottish Ultra scene is good community, and we’ll both meet again at races through the year including The Fling.
Arriving into CP2, I hit some familiar territory. Trawden 7 runs this section in reverse. For once comfortable with the nav, we left the CP.
Prior to this the route, twist and turns through the East Lancashire landscape as much as it can. Sometimes bizarre and seeming pointless. And easy to catch the unwary out and lead them in the wrong direction.
Up onto the Pendle Bridle Path as it cuts across the front of Boulsworth Fell. This would be a quick section. Five miles to the next CP, good underfoot conditions, and a great view back toward Pendle. 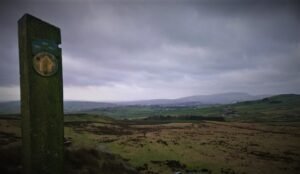 Ha, how wrong was I. That headwind!! It bullied us for the next few miles, more than once forcing us to a walking pace, which was as quick as the running motion we were attempting.
Brief respite in the small folds in the landscape, just meant upwards! A random gentleman on the course appeared. Seemingly doing hill reps and handing out jelly babies to passing runners. He would appear at several times throughout the day, all over the course bounding around like Tom Bombadil, with a big smile and a happy welcome.

I think CP3 to CP4 was the easiest section of the day. Lovely too along the banks of the River Calder, and sure inthe knowledge that I was to get a warm welcome there.
Garry had come through, following the group chat, with his son Ryan, both good pals. Garry should have been taking part, but not fully fit had luckily doged a bullet by passing his place to Robert
Also in CP4 was my brother, sister in law and niece. The weary climb up from the river bank, interspersed with ‘witty’ signs from Blackledge (famous for his bar!), was rewarded by a cuddle from my niece as I approached the CP. YASS! 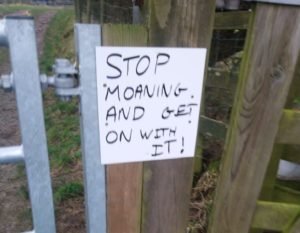 Inside I was met with the best – Michelle and Jim were both there to greet me with warm cuddles and waggy tails.
Jim had got my message too. Waiting for me was a lovely vodka and coke, and a wee Drambuie. I would head back out the door with a glow! 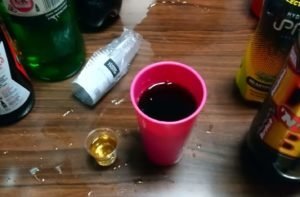 Turning my back on my family and friends was hard. The weather was taking a turn for the worse, and the rain was starting to be felt on the the wind. It was not going to be pretty on the Hill.
Cajoling Scott away from his supporting wife who had been at every CP with goodies for him, was a good distraction for me leaving my support. He had stocked up on hot food and was raring to go! 😂
Signposts teased us with less than mile to Barley. The next check point. However we had Pendle to think about. And a wee hill before Pendle to go up and down as well! A lovely descent through a pine forest before the hill climb from Ogden Reservoirs.
The weather was firmly in now. The headwind bringing rain with it, although we were slightly sheltered by the valley of Pendle Water. This wouldn’t last. A hard right turn and a tough climb leading us the the hilltop path. Out of the mist and low cloud comes a bounding Tom Bombadil, with the last of his jelly babies clutched in his hand. With a cheery ‘good luck’ he bounded off down the hill to greet the next weary runners. 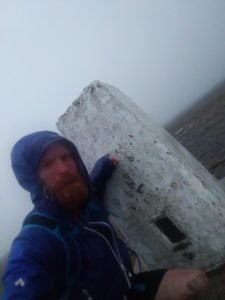 The only good thing about the path across the top of the hill was the tailwind. Hood up, the wind battered the rain into the back of my head, and cleaned the mud from my calves.
The descent of Pendle’s Big End is tough. Footpath improvements, very important for protecting the hill, but hard underfoot. I feared for those that would néed to come down here in the dark using headtorches.
The light was failing and the stretch from CP5 to the finish would be in the dark. I had planned to finish in daylight. The conditions put paid to that. And the vodka had put paid to me remembering to get batteries from the Sidekick for my head torch.

The final run in

I ran the last 5k – oh 5k….wait. CP5 had come in at 66km. We only had 1k to the finish eh? Those dreams were dashed by the amazing team in the CP offering tea, toast and tales of just 3 miles to go!
The last 5k were in the dark alongside my trusty running pal Scott with his hi powered headotrch casting plentiful light for us both.
Not the only plentiful thing in the last 5k. Mud. More mud. This time slippy wet sink in deep mud. Not like the sucking heavy mud of earlier in the race. Mud. Mud. And some more mud.
Suddenly we were back in civilisation. Well, East Lancashire anyway! Houses appeared, roads and traffic. Cars in the way. There’s the pub!! We’re 500m from the finish. Wrong pub. We’re 1000m from the finish.
There’s the Heritage Centre. The finish. We came in from the start. Apparently we missed the shortcut to the finish line. 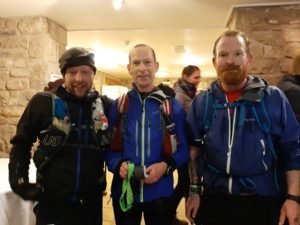 There’s Michelle and Jim! And there’s Robert. A shitter of a day for him, led to a first ever DNF. A good call. A right call, if a rough decision. 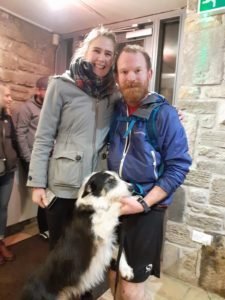 Selfishly, meant I got to have a beer with him. And my faithful and loving Sidekick. She’s amazing. And I couldn’t do this without her.
📸 Me, a pleasant lady at the start line, Jamie McIlvenny
Read my other blogs here
Strava route here