Scotland’s most southerly running race, the Mull of Galloway Trail Marathon was a certainty to cause us some logistics headaches.

Taking over an event last organised by the Rotary Club of Stranraer in 2018, we hoped to bring a more runner focused approach to the event, and build on the good work Rotary had put into the Trail and the event.

Recce’ing the route and understanding the needs of our participants involved several lovely weekends away in Galloway, camping on beaches and exploring the local eateries. (We can heartily recommend Tigh Na Mara at Sandhead!)

Race day brought it’s own logistic headaches. With registration open at 7am and course marking required, the night before was a late one! Trudging into dark woodlands clutching head torch and arrows, and not even knowing until the morning of the race if the complete trail through Grennan plantation had been cleared. A large fallen tree was still a major route obstacle 24 hours before the race! 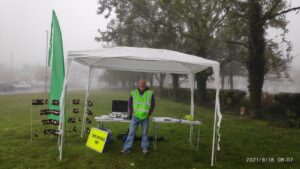 Race start delayed by a late bus (RD nightmares coming true), and then fog at the start-line! The start of the race due to be on the sounding of the fog horn at the Mull of Galloway Lighthouse, bizarrely due to the fog the horn could not be sounded.

The coastal fog is a fickle thing, highlighted the weekend before by local drone photographer, Scarlett Visuals. In the space of 25 minutes both the below photos had been taken.

We gave the fog 15 minutes, it cleared enough for one of our runners’ young boy to press the button. The horn resonated out to sea and runners set off on their 26 mile journey north to Stranraer. The fickleness of the fog was further highlighted by photos taken by Scarlet Visuals, 15 minutes after race start, of dolphins frolicking in the sea within site of the start-line! 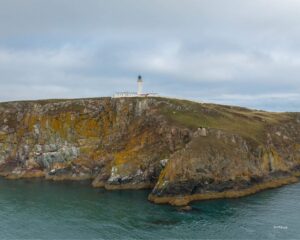 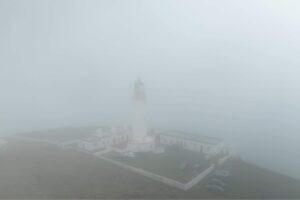 Now the mad dash to start the next race, the “Ardwell Chalets” Sandhead 10 where the delayed marathon start had a knock on effect.

An important early turn off the beach still required marking. Our recce had seen us miss the turn. Due to it’s location on the beach by the caravan park, it was deemed not advisable to mark in advance and leave to chance.

Alex trotted off down the beach to ensure the marshal and subsequent signage were placed correctly, with Michelle debuting on start line duties.

Another race underway, participants scampering along the beach, across sand dunes and avoiding the recently cropped nettles.

The early morning haar had cleared well, and against the forecast the sun burned through. Thankfully we had put plenty water along the route…

Or so we thought. Feedback at the finish line was a lack of water stations on the route. This was a surprise. A conversation. A phone call or two. A core team member dispatched in the car to track down the missing water. The 5am ‘care package’ drop off at the Commerce Road crossing had not been seen by the marshals there.

Fortunately with the feedback received from runners we were able to fix this for others still out on the route.

The revised finish for both events sees runners pass through Agnew Park, past the RNLI station and along the front before finishing down the pier. This brings both events closer to their advertised distanced. (A wee tweak required next year still!)

Poor Kate – she was the marshal tasked with informing runners they had the extra section to run near the race end! 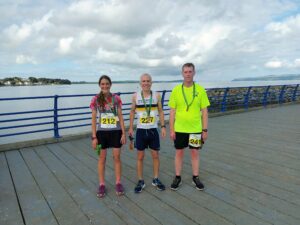 The marathon course record set in 2016 is 3.37 by Rick Williams. A message from the marshal at Henry’s Bay House “lead runner through”, caught us by surprise at the finish. Despite being aware he was well in front from the newly introduced GPS tracking.

A sprint down the pier saw the line crossed in 3.44.08 by Stuart Murdoch. A stunning time! 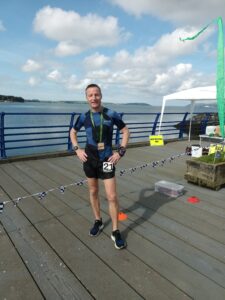 Second place, and a big surprise to him upon being told was John McCabe (Troon Tortoises) in 4:12:20 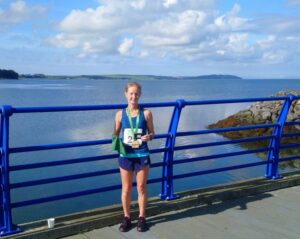 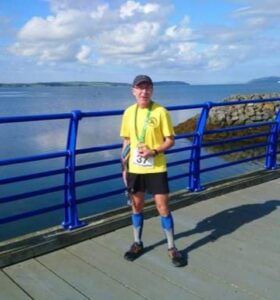 Full results are available on both the race timing company website.

The sun was certainly enjoyable for the marshals and race team, even if not for ideal running conditions.

It also made for perfect BBQ weather at the finish. Big thanks to the Rotary Club of Stranraer for organising this, and we hope you all partook. The homemade coleslaw was particularly delicious!

Folk have shared some race photos to the Acorn Trails Pinboard on Facebook. Feel free to take a look and share, or upload your own.

We’re hoping you all enjoyed the first Acorn Trails Mull of Galloway Trail events. We hope to be back in 2022 and be better. Your feedback in order to achieve that is welcome. Please spare a couple of minutes to complete our quick survey.

A couple of very special thanks apply.

Former Race Director, Gordon Baird – his vision brought the Rotary Club Mull of Galloway Trail from route to race. His handover to us, advice and continued support can’t be underestimated, and is greatly appreciated.

Gordon’s Rotarian colleagues Chris Brewis and Hugh Parker. Chris’ support of the core race team and sponsorship of the Sandhead 10 made the weekend a much easier operation. Hugh for both his assistance in recruiting half of the marshal team and his arrangements (and his team) for the post finish food and drink.

Special thanks from most runners and the core team go to Milly – The impromptu DIY refreshment station at her front door at High Mye Cottage was commented on by many a runner. She also helped out at the preceding water station and road crossing at Clayshant. 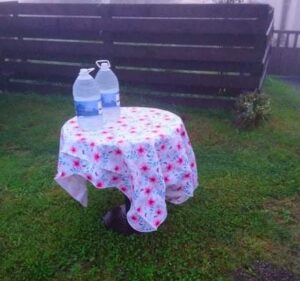 Matthew Caughie,  Bryan Scott and Richard Masters for their work on getting the Grennan trail cleared for race day.

The core team – amazing and as always above and beyond! Paul Fletcher, Robert Hill, Michelle Sinsheimer and Jim

The marshal team, without whose support the event would not go ahead..(in potentially race order!):

Mull of Galloway Experience (The Lighthouse), Ashley and her boys Arron and Joseph (Maryport caravan park), Ann Stanley and team at Drummore, John Mowatt at the approach to Ardwell, Grace and  at Ardwell Chalets, Lamont Hair and John Mackay at Dyemill Cottage, Gordon and Ann Baird at Sandhead, Kirsty Scroggie on the beach, Tom Stevenson (creator of the Trail) and Milly at Clayshant, Helen Weymss and Kate McIntyre at the B7077 crossing, Gordon Weymss, David Campbell and Fiona at Commerce Road and Big Wood, Daniel Sinsheimer and Henry’s Bay House at Cairnryan Road, Sam Hampton Smith and Kate at the marina entrance, Hannah and the RNLI team.

Thanks also to Custom House Stranraer, KitST, and Amvale Scotland.

We look forward to seeing you all at a future Acorn Trails event – the next one is The Dunky on October 24th in Mugdock Park, nr Glasgow. More details can be found here