The Sad Demise Of The Small Race Trophy

In the absence of negative feedback, I’m assuming (tacit) permission to treat you as an ‘alternate audience’ when my usual audience (Running Niece) is in the same race at Mabie Forest😊

Is there a setting more beautiful but still eminently accessible, than Mabie Forest? This wee race has to be one of the best ever. We’ve entered every year since we started racing…6 years now…and it was the first race where I ever won a trophy. 😁🏆 In those days they had trophies 1st to 3rd in each veteran age category going in 5 year steps, Mine was a 3rd place F45 trophy and I was a LONG way behind the F45 winner, but was immensely proud of myself. Although it’s not exactly lost in the mists of time, it seems as though, since then, we’ve entered a different, ‘voucher’ era in race prizes.

Nowadays Mabie has a total of 3 female veteran prizes, one each for 40+, 50+ and 60+…(same for men) and no trophies! 😕 Sad to say, this seems to be a feature of smaller races nowadays. The (small) collection of modest little trophies I have, from various small-town races around the country, seem to have tailed off around 2015, even though I still do many of the same races (and probably more often win age group prizes!) (One benefit of getting older as a runner, the competition thins out somewhat 😂).

It’s a nice run anyway. Mabie Forest (more information) is an excellent reason to live near Dumfries, it’s fresh and green and lovely and only 10 mins drive from the town centre. Our kids used to love the climbing frames, death slide and monkey bars in the adventure playground, and there are dipping ponds, bridges for pooh sticks, long grass meadows and interesting forest walks short enough to herd small children round without too many tantrums. We often go for training runs around the miles of paths there and have family nicknames for most of the features.

Don’t you love the cheerful buzz at the start of a wee local race? Even if you don’t know anyone it feels nice, and completely different to bigger, commercially organised events. Dumfries Harriers always have plenty of marshals, and they’re all very friendly and encouraging, whether you’re rocketing off at the front or slogging along at the end. I was extra pleased to see that so many of their fast female runners were on marshal duty 😁

We came into this race pretty tired (yes, I know we seem to say that often!); the Dick Wedlock 10k and Edinburgh Half being actual target, proper-taper, hard-effort races and us only 2 weeks past that, with 2 extra races (Race the Train and Grantown) last weekend instead of recovery. Also, Reformer Pilates on the Friday. The thing about Reformer Pilates is it really works all kind of obscure core muscles in a way that definitely helps your running, but it’s really exhausting and makes said obscure core muscles tender and sulky…but you have to do it to get the benefit and if you’re racing all the time and missing it so you won’t be sore in the races then you have to sacrifice that benefit. Probably matters more for auld yins too. Long story short, if it’s not a ‘target’ race, no taper, do the classes and just tell the obscure core muscles to shut up and do their best. 😫 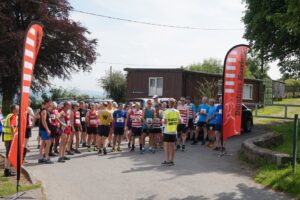 So Mabie was, emphatically, a training race. No anxiety, don’t chase anyone, take as long as it takes, concentrate on good form. It was a perfect running day, sunshine in the sky and all the wee birds tweeting prettily in the trees. The starting horn sounded and off we trotted, half a mile on level fire road. Alex (partner of Michelle the Niece and Serious Running Snake) meanwhile, tore off in a cloud of dust!

The long hill that starts half a mile into the race route is known in our family as ‘Relentless brown’ (because it’s on the brown walking trail). The lack of shade as you plod up the endless hill prompted a re-think on how perfect the weather was, but, hey, it’ll likely be hotter in Malaga…the next junction in the race is only 2/3 of the way up.

Relentless and the turn off onto more level roads was welcome, as was the sporadic shade. Another half mile or so later we turned up into the woods on a favourite, undulating path…in this case undulating means proper ups and downs, some of them (like ‘Mountain Goat Crag’ which looks out over a truly magnificent view of the Solway Estuary with Criffel posed in the background) almost needing hands as well as feet. I got caught behind someone in less of a hurry on the way up there, mega frustration! Pet hate of the day: slowing down against your will when going uphill. Losing momentum, IMHO, just makes it harder. 😕 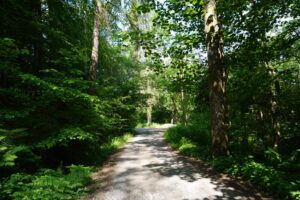 ‘Badger path’ where a – surprisingly long-legged – badger actually crossed in front of me once on an early morning run, undulates (less sharp but still up and down) down the other side and is a good place to pick up a bit of speed…unless you’re stuck behind someone running just a bit too slow on the single file path!

Then the route turns along the side of the hill on ‘Butterfly Walk’. I think that’s the actual Mabie Forest name of that bit, there’s certainly lots of butterfly information along the way. And actual butterflies 😆. Then at the end of Butterfly Walk is the water station…on a T junction with the fire road…too busy offering water to remember with directions; Alex reported having to pause his charge to ask which way he was supposed to go! There were a couple of runners in front of me gave up and walked on the next set of uphills, but I’m always too paranoid to do that in case I can’t get started again.

The levelling out is welcome again along the top of the hill, then it’s right onto a tricky wee path until the terrifyingly steep downhill of ‘The Glorious 12th’, which is (😂) on the orange walk. Geddit!? 🤣🤣🤣. The 12th was actually ok as it was dry underfoot, so apart from the odd loose rock didn’t feel too life-threatening. At the bottom of the hill there’s a super, open and undulating (very gentle undulations this time) section for another half mile or so, just enough of an overall downhill slope to make you feel you’re springing like a superhero 😊. Turn right at the ‘Crocodile Pond’ (elder daughter named that one!) and up the ‘Green Hill’ (well they can’t all be creative 😀). When the marshal at the bottom of the 12th said I was 1st female I thought I’d heard him wrong, but the next one said the same. Oh no! Pressure. What if someone overtakes me!? How close is the next one (CAN’T LOOK BACK!)?…It doesn’t matter, I told myself sternly. It’s still a training race, and 2nd or 3rd is still brilliant. It’d be lying to say I didn’t speed up a shade, but I tried to keep the head. After the Green Hill there’s a longish stretch on fire road going round the side of the hill, then the last km (it’s marked!) follows a stream through shade-dappled beech-woods which we call ‘Antelope Trail’, because it gives you a real ‘bounding gazelle-like through the sunlit forest’ feel. 😃 🦌

As it happened, the person I could hear behind was male with no other females close, so I came in 1st female. Yes, really! 😁😁
2nd female, would you believe it, was the Running Niece! Oh, and Mr Running Snake had blistered the trails to come in a full 2 mins in front of everyone else in the race, winning 1st Male. 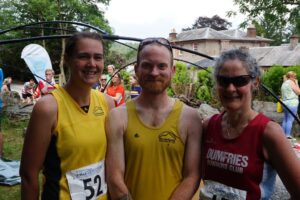 Here’s the sad thing. I’ve never been 1st in a race before (school doesn’t count). I think it’s not all that likely that I ever will again. I got 1st prize, and it’s a voucher 😢. How am I supposed to gloat over that in my old age?

“See these Injinji socks?” I’ll say to the clustered great-grand-weans…” These came from my winnings the time I actually WON a race!”

Nah, vouchers are fine for superhero runners with trophy fatigue; I say bring back the cheapo keepsake trophy for us normal mortals who want to treasure our wee moment of glory forever! 🏆
Anne