Plean barkrun (see what I did there?!) wasn’t my first parkrun. In fact it was my third consecutive parkrun, having done the Crichton in Dumfries and my new local Queens parkrun in the two Saturdays previous.

I must admit I’m getting pretty good at them! When I say ‘good’ I’m mainly referring to the reduction in casualties per parkrun!

I’m no rule breaker. Mum and me stick to the back, she keeps me on a short leash and we are always mindful of other park users. But hey, I’m a beginner so we have had the odd near miss! On the whole everyone is managing to stay on their paws! And I’m learning to take corners wider without the trip wire lead situations coming into play!

So it was Plean’s 2nd Birthday on Saturday (about 14 in dog years!). The carpark was ram jammed so mum had to pull off some ditch and run tactics since we were a bit behind schedule already.

We arrived in time to hear the brief and be piped to the start though. That was special. My ears were up and my tail was a-wagging, and to add a little Jim to proceedings I peed five times on route. 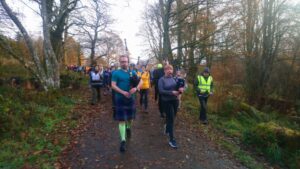 When we got to the start line, dad was up front. I headed straight for him and did a couple of giddy hops to wish him luck; me and mum then headed to the back where quite a considerable CaniX section had formed. Most of the guys were cool, we had a quick bum sniffing session, swapped tactics and got our leads tangled as best we could.

One guy was mega pumped, I’m talking chomping at the actual bit. I went up to say good luck and that, but he was wired and barking – a lot! I told him to chill, reminding him parkrun was a run not a race! When we started it was clear he didn’t agree. He and his human flew up the right hand side and were gone before I had even stood up. Skills!

We took it much easier than all that and cruised along at the back; taking care to keep a safe distance from the crowds. After a wee while the narrower paths and crowded bits opened a bit so we braved the odd overtake. Mostly we just enjoyed the splendour of the route.

I love being in the forest, and the mud! Yes!! Mum got dragged through that at every opportunity! Of all the parkruns I have done so far, Plean barkrun is by far the softest underpaw. The squelch of the mud and the lovely autumn leaves, trees to run round and roots to hop over, what more could a Jim ask for?!

About 3k in I was starting to lick at the mud looking for hydration opportunities. Mum said, ‘water station up ahead Jim’, and by jings there was, my favourite blend of mud, leaves and fresh rain water, I took full advantage. Yes, this route really has it all!

After rehydrating I was ready to roll again and I had a new bounce in my swagger! We were running alone for a while now, perhaps we’d taken the lead?! (groan!)

We got to a bright forest and as we ran through the trees over the soft forest floor, the sun was shining through the leaves and the piper was playing a merry tune in the background. It was perfect. Mum said to me, ‘this is it Jim, this is what it’s all about’.

She was right, it was beautiful. I looked back at her and gave her my best grin, framed perfectly by my recently acquired mud puddle moustache. Some awesome downhill followed but mum takes a downhill very much like she drives.. With the handbrake on!! I don’t mind though, like I told K9 Bolt at the start, barkrun is not a race.. (unless I’m running with dad!)

So we headed to the home stretch, passed the piper again and a couple of dog marshals (awesome job guys, thank you!) There was a lot of sprinting going on at that point but we stuck left and let them fly.

The finishing cones were in sight but I could smell my dad so I attempted a beeline for him but mum said ‘leeeeefffffft Jiiiim’ so I quickly got back in line and we finished in 99th in 30:54, pleased with that.

Would highly recommend Plean to my pals both for the amazing route and the friendly welcoming atmosphere provided by the team there. Thanks to all, we’ll see you again soon. Another barkrun….. 🐶 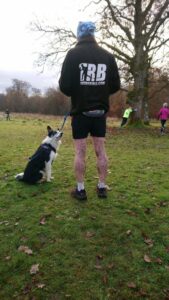