It’s a bright Saturday morning, clear skies and sunshine, but cold – autumn has definitely kicked in. I’m driving to Clydebank to meet Paddy Bayliss for a chat and a run around the Kilpatrick Hills. I like getting to know other runners. Hearing their stories, talking about PBs, races, why they love to run, and other things that we have in common. During our run we realize that Paddy and me have both had two epidurals! Me, during childbirth, and him to get a hip replaced – twice! 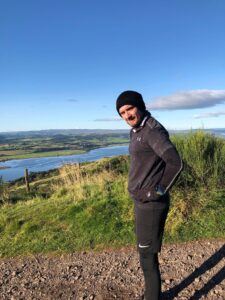 Paddy used to play a lot of football, mostly on astro-turf. He found that he was good at running and catching the ball but couldn’t stop and change direction quick enough. His fellow players used to tease him about it, but he didn’t think much of it – he just thought that was something he wasn’t good at. He started running and enjoyed this more and more. As he progressed and put more mileage in, he realized that something wasn’t quite right with one of his hips.

The first doctor he went to see fobbed him off but he got a second opinion. He was quickly referred to an orthopaedic specialist who diagnosed him with osteo-arthritis.He was told both his hips – even the one that wasn’t giving him any trouble – were down to bone on bone and had to be replaced. The consultant was shocked to hear that he had run a 43m 10k the week before! Paddy quickly made the decision to go ahead with the operations and had his first hip replaced in August 2015 at the age of 39, and his second one 10 months later when he was 40. His first hip replacement is ceramic and his second one metal.

Recovery post-op was pretty slow, especially after the second operation. Paddy couldn’t do much at all for nine months. When he started running again in the early winter of 2017 after his physio rehab it took him a long time until he could run a mile without stopping. Getting back to full fitness after his muscles had wasted away was a long slog, but this didn’t stop him – he was even more determined than before. He kept heading out for runs in the cold and wet, running reps under the Erskine Bridge, adding more each time. The first time he managed to run to the bridge was a major milestone and gave him a great sense of accomplishment. “I never understood how hard it is to become fit again. I think I took it for granted,” he tells me.

In addition, there was the fear of falling. Paddy was worried he would slip and damage his hips again, but slowly he learned to trust his new body. A fall did occur during the bad snow of 2018, which just helped to alleviate the fear of future falls.

While some surgeons do not advise to run post-op, Paddy’s first orthopaedic specialist gave him the all-clear and told him to “go and enjoy himself while he was still young” – and this stuck with Paddy and motivated him to keep going. He also found help and advice from The Hip Runners, a Strava group for runners with hip replacements. 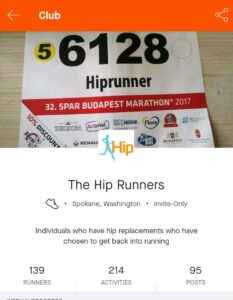 Slowly he got his fitness back and found himself getting faster and faster and beating his previous times. His 5k time is now down to 19’31’’, his 10k time to 41’09’’, and his half marathon time to 1.35’49’’ set at Balloch to Clydebank in 2019, his favourite race so far. Paddy loves the sense of achievement he gets from beating his previous times. He is also a big fan of parkrun, often travelling to new destinations on a Saturday. Placing in the top 3 in the parkruns has been a massive boost to his confidence.

He definitely noticed a positive change in his body after the operations, for example his posture is much better than before when he used to lean forward because his hips were so tight. Now he runs quite upright with his shoulders pulled back. He was certainly looking strong when we ran up Cochno hill together – and he was happily chatting away too!

Paddy’s determination post-op stem from his love of running and how it has helped him mentally. Getting him through some tough moments in life such as a marriage breakup and the passing of some close relatives, including his brother’s suicide and his mother’s death from cancer. He finds that it keeps his mind happy and healthy. He’s tried swimming and cycling but it just doesn’t do the same for him. Only the physical exhaustion of a hard run will give his mind peace. “I would recommend running to anyone struggling with their mental health. To get out there and run is the best thing you can do for your own head as a healthy coping mechanism instead of leaning on alcohol,” he says.

His love of running has also rubbed off on his relatives, several of whom he has personally trained up, starting with a 1 mile run / half a mile walk combo and increasing it slowly from there. “Unfortunately, some of them didn’t stick with it after my operation,” he jokes.

His sister’s sudden death in 2014 from a brain aneurysm has also inspired his carpe diem attitude to life and running. “I don’t know how long I’ll be able to do this for, so I just want to keep going. I won’t stop until my body tells me to,” he says. His focus is reflected in the fact that he will go running no matter the weather or the time of day.

When I first spoke to Paddy he told me that he likes to get his runs done early in the morning. I looked at his Strava and I was shocked to see that by “early” he actually meant in the middle of the night – around 2 or 3am. Luckily, he was happy to meet me after sunrise.

“I prefer it that way,” he tells me. “It’s peaceful. There’s no traffic, and I can run in places I couldn’t run later. I just put my headtorch on and head out.”

He even likes heading into Kilpatricks in the middle of the night. “I just kind of like to scare myself,” he admits. He also loves the feeling of isolation and mental exhaustion when running in the hills. “You need to think about where you’re going so you feel drained once you’re done.” 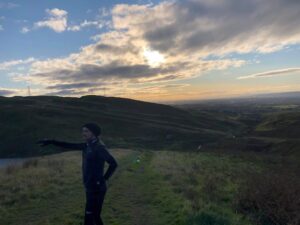 Listen to your body

While Paddy feels strong, he knows he isn’t invincible. “I know that I have to listen to my body,” he says. The longest run he has done is 19 miles and he feels like he can’t go much further. Running shorter distances several times a week seems to work much better.

He hasn’t really had any trouble after the operation. Although one of his hips, the metal one, gives him a bit of bother every now and then. He went to see a consultant a few months ago who told him that it was just the changes in weather.

While lockdown hasn’t really affected Paddy – seeing as he does most of his training in the middle of the night without any company – he admits that he has become slower, simply because there have been no races to focus on. He would like to get back to his PB times; one of his goals is to run a sub-40 min 10K. Having chased that goal myself, I know that it’s tough – but I have no doubt that Paddy’s determination will get him there.
Follow Paddy on Strava: 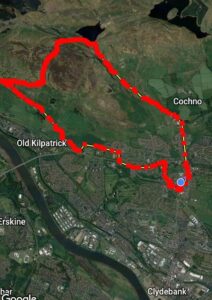