I lace up my trainers and start running down my street. It’s Tuesday lunchtime, and I’m heading out for a 8k loop around the area. I’ve been working from home for the last 12 years and I like to take a mental break halfway through my day to run errands or train.

For the first few blocks running feels fine but then I’m hit by the dread and boredom of the tarmac. Every step feels the same. I keep looking at the same thing: cars, houses, people, and grey, grey tarmac – thud, thud, thud. My plan is to break up my run by doing 20 minutes at a steady pace in the middle.

As the minutes tick by I focus on my breathing but slowly I can feel my body revolt against the tarmac: my left hamstring tightens up, the soles of my feet are burning, my left knee feels sore, and by the end of the 20 minutes my left calf has cramped up. I blame lockdown for this; during the last year I’ve been running less on the road due to shins splints, but lockdown has reinforced my hate of tarmac and driven me even more off road and into the hills.

At the start, I thought lockdown would be a great opportunity to focus on speed sessions and get me running fast again. I took part in a number of virtual challenges, such as  the Scottish Athletics Virtual Road Relay and the Migo Mile. My goal was to get my 5k time back under 20 minutes. I also did a couple of reps sessions such as running 10k in my back lane and reps to mimic running up a hill, and enjoyed the mental challenge of this. 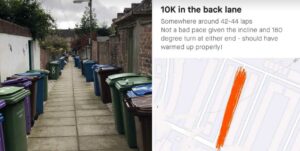 Running, or any kind of exercise, is always a highlight of my day as I switch off from work and the challenges of everyday life. Being in lockdown with two boys aged 4 and 9 while trying to work and home school has certainly reinforced the need for this, so I was looking forward to my speed sessions to work hard and focus on a goal.

After a few weeks I was getting really annoyed with the amount of people that were out and about while I was running. Because we were only allowed to head out once a week to exercise, suddenly everyone was out. Staying two metres apart was tricky; on a typical 5k run I would probably meet 30-40 people that I had to try and avoid.

One of the issues was when running towards a couple: there would be a few seconds of stare-off, and then one of them would move to the left and the other one to the right, leaving me with a narrow path in the middle – definitely not two metres! I started running in the street which helped somewhat since there was less traffic. Still, instead of giving me the usual ‘break’ at lunchtime to switch off and do what I enjoy most, I was coming home more stressed than when I left.

The situation wasn’t much better when heading to the local trails in Queens Park, Linn Park, or Pollok Park. Usually the trails would be quiet during the day, but with kids off school and some people furloughed, it was busy, especially when the weather picked up. The mountain bike trails in Pollok Park were mobbed with families on bikes, and in Linn Park it was impossible to pass people on the narrow path along the river. With the car park at Cathkin Braes closed, I found this slightly more bearable. Only people living within walking distance were (technically) allowed to be there.

Getting up earlier to run was an option, of course, but I’m not really a morning person – although I did get up very early one morning to try and catch the sunrise at Cathkin Braes. 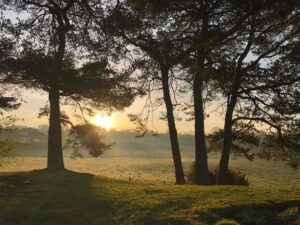 ‘Cycle To The Hills’ Runner

I saw a lot of people post really long bike rides on Strava. Initially I thought that was taking the ‘exercise once a day’ thing a bit too far. I also wanted to focus on my favourite sport, but had to admit that there was only so far I could run to escape the city (Cathkin Braes at the most, for me). Then the idea formed in my head that I could cycle somewhere quiet to run.

I did my first ‘cycle to the hills’ on 20th April. Cycling to the Kilpatricks took me about an hour, and then I ran for an hour. I gave myself the limit of one hour since I still had to cycle home; the time passed way too quick and I really wanted to stay longer! I loved standing on top of the trig point with nobody around except a few walkers in the distance. Escaping the tightness of the locked down house, the city, the back and forth between work and children – it really sorted me out mentally. From then on, I tried to head out once a week, and the trips were getting longer. 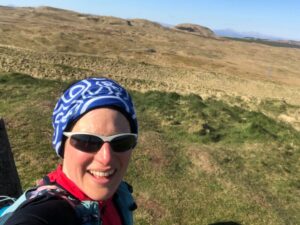 ‘Cycle To The Hills With Friends’ Runner

I roped others into some ‘cycling to the hills’ adventures after the easing of rules, allowing friends to meet up for a run which was a welcoming change. We cycled to the Whangie to run over to the Kilpatricks, to Dumgoyne to run up to Earl’s Seat, and to Clachan of Campsie to run up to Cort-ma-law and Meikle Bin. It was great to explore the local hills, and I enjoyed not wasting time driving in the car, maximising my time away from home in terms of exercise. I also managed a long cycle to Muirkirk to run up Cairn Table, followed by a cycle over to Loudon hill before heading home. 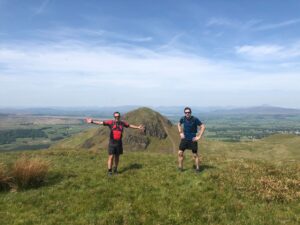 It was the best feeling ever – getting out and completely switching off; apart from my legs feeling burst on the bike ride home ( usually somewhere along Maryhill road).  Eventually I did also get into the long bike rides (it’s amazing how far you can cycle if you’ve been used to doing the cycle/run/cycle thing!) as well cycling to swim in a loch.

Once we were able to drive to places to run, the mountains were calling and I’ve had some epic days out in the hills since then. One of the nice things about the post-lockdown era is that I find myself making more of an effort to meet up with individual people – both forging new friendships and catching up with existing ones. 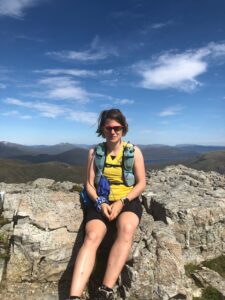 Running With A World Record Breaker

One such occasion was when I joined my friend Carla Molinaro in her record-breaking run from Land’s End to John O’Groats in July.  I had decided to run 20k with her on tarmac, which had me a bit worried. I had serious doms in my quads from a long cycle to the hills adventure a few days earlier. Of course, I couldn’t complain to Carla about that when I met her near Moffat. It turned out that her pace had slowed somewhat since her first few days when she was banging out 4 hr marathons, and my legs managed ok. It was lovely to see her and chat to her – despite being in a lot of pain she was still laughing and sounded very strong. I had no doubt that she would get to John O’Groats and break the record – which she did! 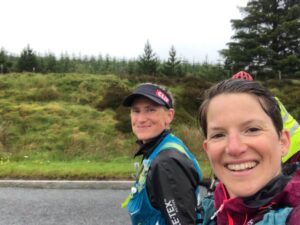