Last week I went to see my friend and massage therapist Colin Clews in Renfrew for a leg rub. He himself hasn’t had a proper massage since lockdown. “Usually I go and see one of my therapist colleagues, but everyone has been so busy since we’ve been allowed to get back to work, I didn’t want to impose,” he told me. His legs must really need it by now, because he’s been running every single day since lockdown, starting on 19th March. Today marks his 150th day of consecutive running.

I’m a bit injury prone myself and running on consecutive days is a big no-no for me, and only rarely happens. Doing it for 150 days in a row is beyond me and I haven’t got a clue how Colin managed to do it. I just hope he will stop soon because I think his legs need a break and he’s looking a bit tired with being back at work and everyone else going to see him for a massage!

I’ve been following Colin on Strava and other than the number of days increasing – Corona-thon day 54! Corona-thon day 92! Corona-thon day 146! –  I’ve also noticed that he has been getting faster. I think at the start he was doing a lot of run/walk intervals – before lockdown he hadn’t been doing that much running, just one or two runs a week of around 5k. Over the weeks his pace has been coming down, and on day 119 he ran a 5k in 26:08 minutes. His 10k went down from 59:37 on day 2 to 55:17 on day 56. He has also lost a lot of weight over this time and I almost didn’t recognize him when I saw him – though his longer blonde hair might have something to do with that too! 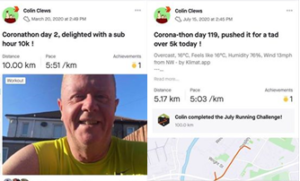 As if running every day wasn’t enough, Colin took part in the Virtual West Highland Way challenge in June, running the 95 miles over 9 days in a total time of 15:56:28. This included some longer runs of over 10k (one 21.5k, a 17.7k and a 14.5k run) as well as some days of doing two shorter runs. He has also been doing quite a bit of open water swimming and some cycling.

Some people set themselves specific challenges to aim to complete, but Colin’s consecutive days of running for this long just evolved as time went on. Initially he wanted to try and run 5k every day for 32 days, to make it one day more than the Marcothon which he had previously completed (this involves 5k or 25min of running every day during the month of December). But since he wasn’t able to work during lockdown, he decided to keep going until was able to see clients again.

He admits that, as a professional sports massage therapist, he wouldn’t advise people to run every day, and stresses the importance of rest and recovery. His argument for taking this challenge on was that he would be getting plenty of rest in between his runs as he wasn’t working. He has managed to keep his legs in reasonably good shape with foam rolling and self-massage, but has had a few niggles along the way, and even found himself doing acupuncture on himself! Eeek!

Day 111 came along and Colin was able to open the doors to his lovely wee massage room in his house and welcome the sore runners. Instead of giving himself a break he found himself heading out for yet another run. By this point he was able to meet up with friends and have a chat, so it had become more of a social thing. He also found that he was enjoying his runs more as he was getting fitter – it has become too addictive to stop!

I loved following Colin’s journey on Strava from comments like “I was fine once I got my arse out the door” or having a rant because he nearly got run over by a lady reversing her car into him. He has been a consistent appearance on my Strava feed and always makes me smile to see another day go by when Colin has clocked a run.

However, I’m starting to worry about the state of his legs and have been pestering him about taking a break. “I want to stop, but I have to make it a round number,” he told me on Wednesday. “I can’t just leave it at 146!” With today marking his 150th day, I do hope that he will give himself a wee break tomorrow! 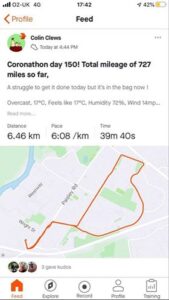 First published on The Run Bible in 2020