You often hear ultramarathons spoken about as “eating contests with a bit of running in between” but I don’t buy this. Certainly not for the “shorter” ultras…maybe under 50 miles or so. Sure, you need to keep fuelled and it’s good to have something you like, and indeed have “trialled”, but do you really need loads of food if it’s only (and I use that word purely in the context of long-distance running) a 50k/30miler? It’s only (again, that caveat) about 4 miles longer than a marathon, and you got through that with a couple of gels and some water stops, didn’t you?

I know the terrain plays a part too, of course…road marathons tend to be reasonably flat, certainly none of the elevation changes that you’ll get on most ultras. Those hills can really take it out of you — both going up and coming down. But you should be walking the ups anyway, it’s an ultramarathon after all and only the truly mad run the uphills in an ultra. 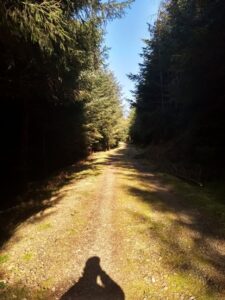 That said, slowing down, taking it easy enough and stopping for photos is what it’s all about, for me at any rate. Remember, you’re supposed to be enjoying it, otherwise why are you here?

Before I come to drop bags — a whole world of potential stress and questions for new ultrarunners — it’s worth thinking about what you’ll carry with you. Whether it’s a bumbag or, more probably, a ‘vest pack’ type thing, you’ll need some water. Unless it’s scorching hot, not too much, because it’s heavy stuff and you can always get more at aid stations*, you might want a soft flask with something like Active Root in it too…again, you should have tested this on training runs. I like it as it has ginger in and this keeps the stomach calm, I experimented with Tailwind too but have found something I’m happy with and you should too. Whether it’s an energy drink, caffeine thing or whatever, know what works for you. And have some spare mix/tablets/whatever in your pack and/or drop bag too. Of which more later.

Food on the run? You betcha — I use the wee pockets in my pack for sealable sandwich bags full of, in one, salted mixed nuts, and in the other, Haribo (or just fizzy cola bottles if I can find any!). The nuts have both salt and energy whilst the Haribo is a wee sugar hit which also gets saliva going if my mouth is dry. I usually have a banana and a Trek bar stuffed in the back of the pack too…just in case. The only issue with these is the chocolate on the bar can get a bit sticky, as can having half a banana on the go too if you’ve not finished it all. But sticky hands are better than fainting on the trail! Again, you need to find out what works for you. Bear in mind also that you might pack something and then not fancy it so it’s good to have a choice 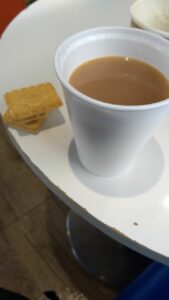 The dreaded drop bags! They are only to be dreaded if you’ve not used them before — I remember getting into a dreadful google panic before my first ultra to find out what I should put in one or if I should bother at all. The internet is full of conflicting advice (says he, adding more!) and in the end I decided I’d take water and a tangerine and hope for the best at the aid station! This is perhaps not to be recommended as a strategy, but I was fine. Flat coke and a kit kat at halfway saw me through. I don’t actually remember being hungry on the day.

The bags shouldn’t be huge, you don’t want to make the Race team’s job any harder and they shouldn’t contain anything you’d be annoyed not to get back. Accidents happen and not all races will return drop bags to the end of the race. A ziplock freezer bag should do the trick, you’re not going on holiday. So keep it simple — the aforementioned flat coke can be good, energy without fizz, something sweet and savoury again, maybe different things to what you’re carrying, possibly a top-up of what you’re carrying? Extra Active Root/Gel Mix/whatever you’re drinking to top up. And maybe a wee treat? Babybel? Chocolate? You’ll likely be stopping for a few minutes at a drop bag point so you might have the chance to use the toilet if there is one and gather yourself for the next bit. If there are multiple drops on a longer race then you might want to mix things up a bit. It’s trial and error really.

Drop bag points can be a good place to regroup a bit mentally and physically. A change of socks, especially if it’s wet, can work wonders for your state of mind here. These can go in the drop bag but could just as easily squish into your pack. A few years ago I changed socks and tee shirt at the half-way point in an ultra and it was bliss. A roasting hot day, my top was saturated and my feet were sweaty, the restorative powers of a change of gear cannot be underestimated. Top tip: spare buff! Carry loads of these anyway, but you can use one to dry your feet before the fresh socks go on!

Aid stations will normally have, as a bare minimum, water to top up your bottles but don’t rely on them for anything else unless it’s explicitly stated in the race briefing.

It’s so easy to overthink it all, and I’m really bad for that myself, but if you weren’t overthinking it you wouldn’t be reading this would you? Whilst thinking too much about it can be a stress in itself, it can also alleviate worries— control the things you can and then it’s less to think about, right?

In that spirit, you’re probably wondering about all the other stuff you could take but what should you take? Well, there’s probably a mandatory kit list and if it’s on their, it’s on for a reason so don’t take any shortcuts there. Things that might not be on it but that you might find useful and may not have considered would be stuff like an extra layer, even just a thin, long sleeve top can be helpful if it gets too cold, or even to keep the sun off your arms, and it will squish down small in your pack. Spare buff. And then another one. They can be very handy. Some tissues/toilet roll in a wee sandwich bag, because you just never know! Small pot of Vaseline — chafing can end your race. 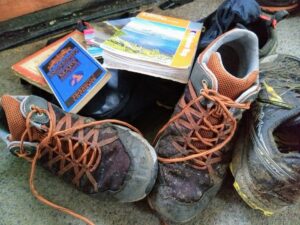 Which shoes? Which map?

Make sure your phone is charged — not just for safety reasons but you don’t want to miss out on photo opportunities. It can be a good idea to have a GPX file of the route on your phone too, just in case. It can be a comfort if you are struggling to have a look to see where the next flat bit is for example!

This isn’t an exhaustive list, and, more importantly, it’s my list and what works for me might not for others, but hopefully it’s food for thought. It’s certainly not intended to add to any anxieties. Most important of all: try and enjoy it.

*be sure to check that before you set off!