Twenty four hours before Pollok By Five kicks off, and the resident parkrun cancel their event due to the icy conditions.

Subsequently, the obvious questions landed with us. Would we be going ahead?

With a later start time, and a much more traily route than parkrun we considered ourselves much safer from the ice risk.

Wrong! Saturday afternoon’s usual pre-race litter pick took place. From the get go it was apparent some tweaks would be needed. The start area was a wee ice rink. We still thought the planned thaw might help with that. As we wandered along the route, the issues started to stack up….”they’ll need to keep to the left at this bit”, “the marshal will need to highlight the ice here”, “‘Keep right’ will be the instruction here to avoid that ice river”. 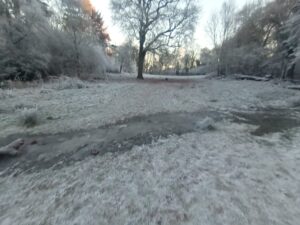 We jokingly suggested we could just do reps of the Rhododendron Trail as a plan B if things didn’t defrost.

Then we reached the Rhododendron Trail! It was the worst part of the course. Clearly there had been a thaw, but as the frost dripped from the trees, it hit the frozen ground and had instantly frozen. The options were frozen furrowed mud, or sheet ice! 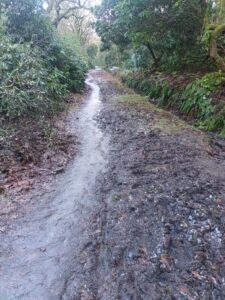 We reached the finish line, one lap walked and very little litter required collecting. ‘Cancellation’ was the phrase hanging in the early evening air. Neither of us wanted that, for us, for you or for the Series.

Options were hastily discussed. Moving the finish and start line? Change the date? Three races in three weeks on January, with no guarantee of improved weather. A new route?

Cogs whirred, burning smells came from Alex’s ears, muttered comments and incantations “bit of this, along there, round here, hey presto”. With light in the park failing, it was too late to check the hurriedly designed alternative. Off home to throw it on Strava. Two laps, a tweak to add a bit of a trail finish, and with a draft of cold beer, 5.2km of fantastic running was created! 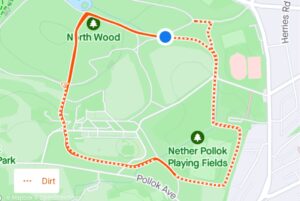 Participants told on social media, the show must go on!!

A few pre caffeine nerves in the morning. Could we pull this off? Let’s get a look at the route! Damn, huge patch of ice 🙈🙈. Another tweak. Another late adjustment to the marshal plan to accommodate, and a unfortunate delay to the start.

Thankfully, despite being cold, runners were not exposed to temperatures that we’d experienced earlier in the week, whilst they waited on the course clear message. 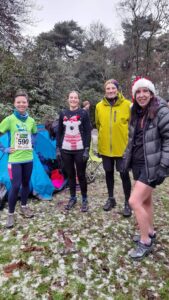 A short walk to the new start line, a blast on the hooter, and a raucous racket from Jim the Dog saw runners finally on their way.

A minor relief, runners completed lap 1 without getting lost or falling on any slippery bits! 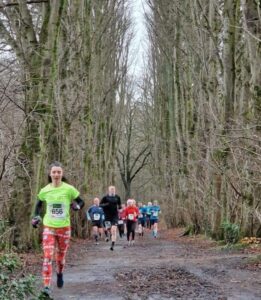 Good comments on the route ensued as well! This was followed up at the finish line, with runners heard to say ‘better than the usual route’, ‘maybe Alex should create all his routes at short notice”, “wish I’d run instead of marshaling”. That last one was spot on. Both of us want to run the route (we got lost in the North Wood when sweeping the course post race! Marshals did an excellent job of clearing the course markings!!🤣)

Muddy puddles in the open grass were frozen, but did not deter the front runners. Grant Jeans just ploughing straight through them! 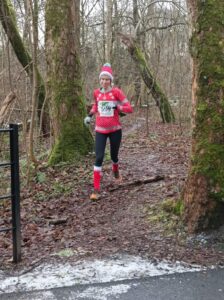 The finish, a sneaky deviation off the main path for a last bit of mud. Much to the chagrin of Mark King (Cambuslang Harriers) who was lining up the last bit of tarmac for some overtaking, but thwarted by the narrow tree lined trails.

A tight corner at the finish lead to some runners on the wrong side of the line, and some quick steeplechase practice from the likes of John Murray (Garscube Harriers) to get themselves corrected and over the line. Full results for the Pollok event are here

Festive themed attire was encouraged, with many runners taking up the challenge. Not to be outdone, H was marshaling in the North Wood dressed as one of Santa’s elves, and only out Christmas’d by a six foot, fully lit, running Christmas tree in the form of Karen McIntyre, and of course Santa himself AKA Colin Gray. 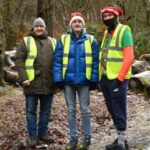 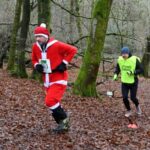 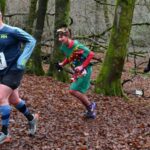 Unlike previous years when we had series entrants, and individual race entrants, this year all the races were open as standalone events.

We’d found in previous years folk would sign up to the series as it was convenient, rather than signing up to six individual races. With no intent to run all six races, this led the races being full, and other folk missing put on an opportunity to take part.

It was however easier to determine who were to be included on the series results.

The series will be scored on a runners best five finishes, enabling a participant to miss a race but still be counted. At this stage we therefore have 87 runners who have completed either 3 or 4 races, and still in contention for the series.

Full series results will be scored on finish place in each race, but only measured against other series runners! Still with me? See what i mean about a bit complicated!

For example race 1 at Kings Park was won by Kieran Cooper, but as he has not completed any other races in the series, he won’t be counted for the series results. Therefore second place finisher at Kings Park, was Grant Jeans, a full series runner and therefore first series finisher!! He’ll get 1pt for finishing first. Second place will get 2pts, third 3pts etc.

So with two races to go, if, in this example, Grant wasn’t to finish either of them, and thereby only have completed 4 of 6 races, he would no longer count for the series results! Everyone then bumps up a place in the standings, and their scores change accordingly.

All will become clearer! Series standings will be created and published between races 5 and 6. This will enable runners to go into the last race knowing who they are battling with!

As always we have a huge list of thanks to our amazing volunteers, without whom this series would not be possible!

Once again thank you all for your generous donations to the Glasgow SE Foodbank. The recipients will be very appreciative, especially at this time of year. 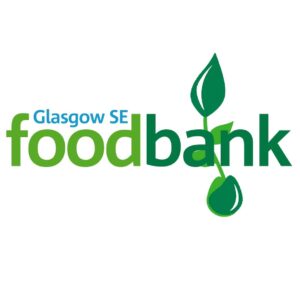 Hundreds of photos were taken on the day by the hi-viz hero team. They’ve been shared on the Acorn Trails Pinboard Facebook group, which can be found here….

For those that didn’t order a series t-shirt at sign-up, you can now order these on the link below. These were only available to order on the entry form for Queens Park, and will only be available for collection at that event.

Check your EntryCentral account or entry confirmation email to check if you ordered or not! A three week gap until Bellahouston Park, which allows you to take place in that other 5k event on New Years Day!

In stark contrast to the other series races, this race is fully tarmac! Which can only mean one thing…..🤪🤪 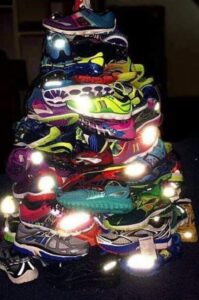 From all at the Acorn Trails team, we hope you all, and you families had a wonderful Christmas and have a Happy New Year.