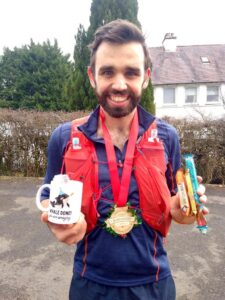 Romy is (not) running with Paulius

When Paulius Peciura, originally from Lithuania but Glaswegian since 2012, finished his 15 mile run on 28th February 2021, his girlfriend surprised him with some treats, a “Whale Done” mug, and a “365 days running streak” medal. He looks well chuffed that he has managed to keep running every day for the past year, clocking an impressive 3,821 miles (6,149km).

I feel slightly guilty because I nearly broke his streak at the end of January. We’d done a run of the Southside 6 route together and a few days later I started to feel unwell. I was worried that it could be Covid and went for a test. I decided to tell Paulius sooner rather than later so he could prepare himself in case he would need to self-isolate. Concerned about how he would be able to continue with his daily runs, he proceeded to measure out the distance between his bedroom and his living room.

My test was negative, so we’re still talking. We meet for a chat in Pollok Park – Paulius is running and I’m on my bike, since after I got over the January evils, I tore the ligaments in my ankle. It’s still worth it for me, and I get a wee 7.4 mile ride in. For Paulius, it’s below his daily average of 10.4 miles. His weekly average sits at 72 miles. 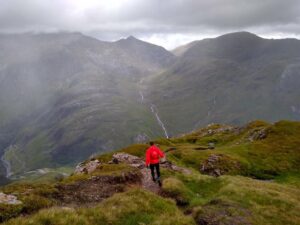 And he isn’t just going in a straight line. What Paulius likes most, is the hills; in the past year he has done a total of 134,045 metres of elevation – that’s more than 15 times the height of Mount Everest.

Also, he’s not just plodding along. He ran a Campsies Trig point traverse of 52.8k and 2,258m elevation in 6h27 mins; he also recently ran a 1 mile in 5’12’’. A typical week will see him do two speed sessions and some easier city runs during the week, followed by long runs in the hills at the weekend.

During lockdown, he has been making the most of the travel exception for exercise to explore the local Campsie and Kilpatrick hills. Before the current lockdown, Paulius was heading further north at the weekend. Here, he also started picking up rubbish while he was out in the the hills. “I used to get very angry when I see plastic lying around. Now, when I pick it up, it makes me feel good and I’m happier because I leave the area in a better state than I found it,” he says. 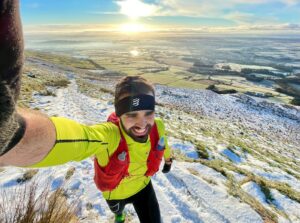 I can’t help thinking what Paulius could do if he gave himself some rest days. Even he admits that it probably would be beneficial to take a day or two off.

But it isn’t as easy as saying “I’ve reached my goal, now I’ll allow myself a break” because, to Paulius, running every day isn’t just completing a goal or fulfilling an addiction – it’s become a force of habit, something he now does automatically.

Paulius started his daily runs in February 2020, a few weeks before the official lockdown, when his office closed, and he began working from home. “I love running at lunchtime; it’s such a nice way to break up your working day. And it means you get some daylight in the winter months, too,” he tells me. “It has definitely made it was easier to achieve my running streak. When you commute to the office, things get in the way, and rest days are inevitable.”

While lockdown has helped his running streak, running has also helped Paulius to get through lockdown. “I probably rely a bit too much on running during this whole Covid situation,” he says. “I don’t know what I would have done if I hadn’t been able to keep running. It was just so nice to get out every day for a run.”

When I ask him if there were any low points over the last year, he just shrugs. “The hardest moment was around 2-3 weeks in. Then maybe at round 100 days. After that, it had become a habit. Now, it’s not a question of if I run today, it’s a question of when.” 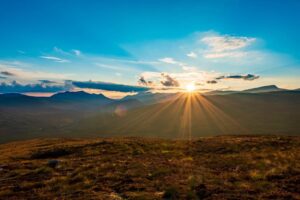 Listen to your body

Paulius was aware of people doing running streaks, and although this was at the back of his mind, running every day was never a must or a set goal that he wanted to achieve. He runs every day because he loves running. He takes every day as it comes and tries to listen to his body and feel for what it can achieve that day.

“Sure, there are days when I don’t feel like running, I’m tired, or too sore from a long run the day before, or the weather is rubbish. But I always feel better afterwards – I never regret having gone for a run. It’s just such a boost for my mental as well as physical health.”

Although Paulius has been nursing a niggle in his calf and heel, he has remained largely injury free. (I’m burning with envy.)

Currently he is doing yoga 4-5 times a week in the morning for 15 minutes which seems to do the trick, and also does a bit of foam rolling.

Eating is important too, of course. “The benefit of running every day is that you can eat whatever you like,” he laughs. When I ask him if he follows a special diet or consciously eats certain things, he shrugs. “Fruit and veg, but also the calories. The body is quite good at telling you what it needs. But yes, there’s sweets, and lots of cakes.”

His other secret, that he only reluctantly agrees to share, is that he probably never runs in the same pair of shoes two days in a row. He counts an impressive 20 pair shoe collection, which can be broken down into road shoes, road racing shoes, trail shoes, ultra shoes, and hill shoes. “The science isn’t exact, but I believe there’s a benefit in swapping shoes around when running consecutive days,” he tells me. 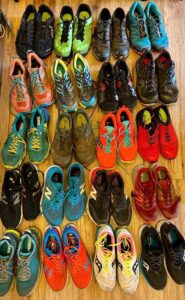 I keep asking him when he will stop. “One day,” he says. “The longer you keep it going, the harder it is to stop. But I’m not afraid to stop running.”

When we meet for a chat, he lets me in on his plan not to run on Monday next week. I’m relieved on his part, but I’m not entirely sure he will achieve this goal. My bet is that he will sneak out at 10pm – simply because he can’t not. [Ed – he finally took a rest day!]

Read more from Running with Romy