January is a good time for setting goals and a plan for the year ahead – be it entering an event or creating your own adventure. Alongside specific goals in terms of speed or distance, you might want to think about adding some resolutions about weekly mileage, making an effort to run with a friend or family, doing more yoga and stretching – and of course, some strength & conditioning to stay strong and injury free during the year ahead.

Over the years I have tried a variety of things including circuits classes, CrossFit, Body Pump, and some functional movement coaching. At the end of 2018, when I picked up a niggle, I signed up for Patrick McVey’s Core Fitness Athletic Training Programme. I really enjoyed this and, as Patrick is a sprinter, it is very running-specific. It was great way to see me through a period of less running, but when I started to increase mileage and intensity again it was just too much. I found myself being too tired and sore afterwards and just not compatible with my running goals.

I started 2020 by doing my own thing, including calisthenics and some weights-based exercises that I picked up over the years. When I got bored, I looked up some new exercises online. During lockdown I also coordinated an online strength & conditioning class for my club, the Westies. Overall, I think this kept me fairly strong and injury free but ultimately there was no structure to what I was doing.

In mid-May I attended a webinar by one of Achilles Heel’s physiotherapists, Iain Reid, whom I had seen the year before about shin splints. In the webinar Iain stressed that regular strength & conditioning can improve performance and prevent injuries (more so than stretching!), and talked about the need for “progressive overload” – that is, doing a few reps with higher weights rather than just body weight exercises. The exercises he mentioned were very similar to Patrick’s but as a long-distance runner himself he was clear that any strength & conditioning should be supplementary and not detrimental to your running. 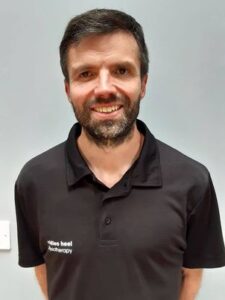 A few months later, Iain followed up with the offer of a customized strength & conditioning plan and I decided to give this a go. Getting set up with a plan required two visits to see Iain at the clinic: the first 45-session was for the initial assessment. For this we discussed past injuries, weekly mileage and goals, and he had me perform a variety of movements to determine any weaknesses, including some running outside that he filmed me with the iPad. A couple of weeks later I saw him for a second session where we went over the individual exercises in the customized plan. Iain has been very responsive via email, answering questions about specific exercises even after the last visit. In terms of equipment, I already had a barbell and weights and some dumbbells, the only thing I bought was a swiss ball for some of the core exercises.

After the second visit, Iain emailed me the plan as a PDF. This included photos and detailed descriptions for two sessions. Iain suggested that I aim to do for three sessions over a two-week period (so a weekly session, and a second session every other week) which I found very realistic. The sessions aren’t that long – the first one took me around 40 mins, and the second 30 minutes. I really liked this as it meant there was no excuse for not doing it. Since I received the plan at the start of October, I managed two sessions on most weeks. Overall, the sessions were shorter than what I did before on my own – but more realistic to get them done and fit in around my training. I liked having a plan to follow; even though I felt like I could do more, I stuck to the session. 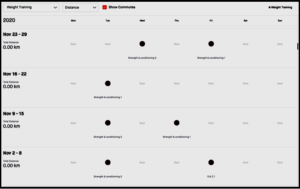 Variety in the plan

Each session included 3-4 core exercises, three exercises using weights, and one plyometric exercise. For the weights exercises, I started off with 2-3 sets of 15 reps using no weights, and then gradually added weights and reduced the number of repetitions. By Christmas I got to about 10 repetitions. The aim is to increase weight until you get to about 5-8 reps, so perhaps I was being a bit conservative with adding the weight! After the sessions, I could feel that I had done something but since each session only included three weights-based exercises, overall the intensity was low and I never felt too sore to run the next day.

I liked the variety of having two plans, so I didn’t get bored, while having enough repetition to see weekly progress in terms of adding weights. I liked some exercises less than others, like the Bulgarian split squat, which I was tempted to dismiss as I found it quite hard even without weights added, and a bit twinge in my knee. But I stuck with it and over the weeks gradually found that I was managing better and could add weight. My favourite exercise is the “push press” – I love how it works the whole body! 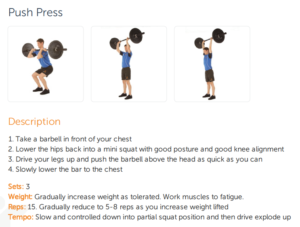 The overall cost of getting the plan was £90 (2x £45 appointments). Given how much I got out of this it has been well worth it for me. Attending a set class is just too difficult to fit in around family and running, and this gives me the freedom of doing the session when I want to, while still following a structured plan that is tailored to me and includes specific exercises to address imbalances and weaknesses.

If you want to get in touch you can contact Iain at iainreid23@hotmail.com or book an appointment through the Achilles Heel clinic. 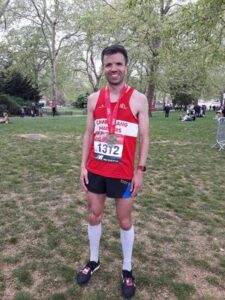